A Tale of Two Pictures

[dropcap]B[/dropcap]efore we even turn to the Table of Contents in The Liberal Arts Tradition, we are confronted with an image — with a piece of art that is designed to embody the philosophy that is presented in the book. I cannot tell you how much I love this, for even the act of representing the philosophy using symbols is a return to a valuable tradition, I think. 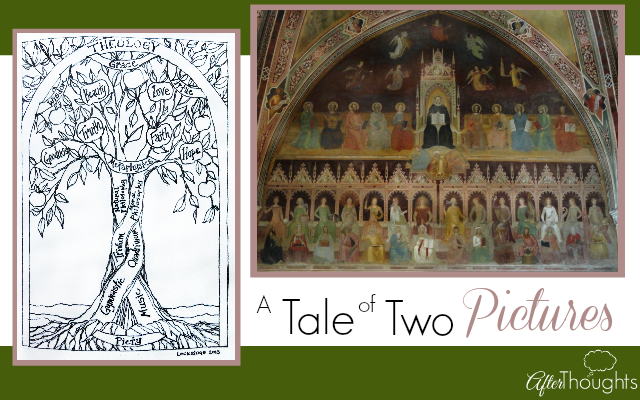 Charlotte Mason also had a picture — one she saw in person while traveling in Florence. While it wasn’t designed to illustrate her philosophy {it preceded her by centuries}, she was deeply attached to it, mentioning it in a number of her volumes, and her biography tells us that a copy of it was brought out for viewing each Sunday at her teacher’s college. I wrote about the fresco here, and I also gave a talk on it last year. I gave the talk again in September, recorded it, fused it with the slideshow, and you can read more about it here.

Anyhow, I thought it would be fun to try and compare the two. Just note that we won’t go into much depth because we’ll be discussing the chapters in future posts.

I found myself asking whether the tree was the philosophy, or the student. I haven’t read the whole book yet — only a few chapters, actually — but I’m pretty sure it’s the philosophy. Throughout the book, Clark and Jain use a highly unattractive and difficult-to-remember acronym — PGMAPT for piety, gymnastic, music, liberal arts, philosophy, and theology — which is what makes the tree so handy. Not only is it attractive, it’s memorable.

We are told that the philosophy of The Liberal Arts Tradition is “grounded in piety, governed by theology.” I think the picture does a good job of depicting that, don’t you?

In addition to piety at the base and theology above and around, we have a trunk with six components: gymnastic, music, Trivium and Quadrivium {which are the seven liberal arts}, and natural and moral philosophy {crowned by metaphysics, which is the highest level of philosophy}.

In the branches, we see the fruit: the theological virtues of faith, hope, and love, and then that famous trinity of the ideal curriculum, goodness, truth, and beauty. It is interesting to me that the artist chose to display all of these as fruit because I think in reality these are two very different kinds of things, though perhaps I am wrong.

I’m not exactly sure where wisdom, grace, and virtue fit into the picture with my preliminary reading, but perhaps some of you who have already read the book can speak to this. Perhaps they are the goal of the philosophy? They hang as if they were ornaments of theology. 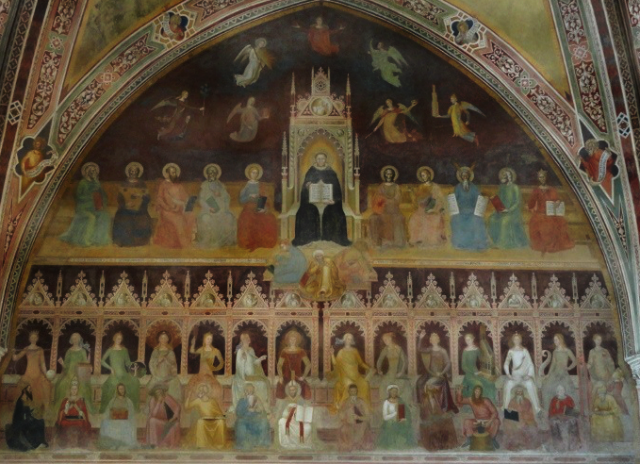 The Triumph of Thomas Aquinas

Obviously, there is a lot more complexity in this one. For the details and application, I refer you to my talk, where I explore each and every person in the picture! This is truly an amazing fresco — a feast!

For now, we’ll just touch on the basics. 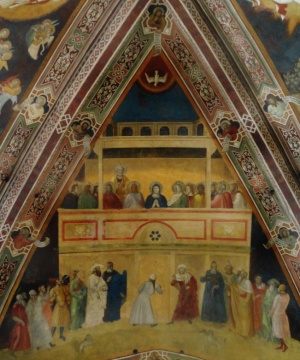 The Descent of the Holy Spirit

Here, too, is a picture of classical Christian education, and it’s where Charlotte Mason got a lot of her ideas about education. There is a panel above this fresco that is called The Descent of the Holy Spirit. Pictured at right, let’s note that there is a downward movement of divine inspiration that connects it to the fresco we’re discussing.

Ultimately, this movement is an acknowledgement that everything in the lower fresco is possible because of the Gospel. Jesus has sent us His Helper {pictured as the dove at the pinnacle}, and as it descends upon Mary and the Apostles, and then beneath them to those who heard the Gospel in their own tongue at Pentecost, and even the dogs at their feet scamper with joy, we are reminded of where Christian education comes from: the work that Christ did upon the cross, and His resurrection and ascension to the right hand of the Father.

To return to our fresco, then, we see a number of the same components as the picture of the tree. The angels flying at the top are the virtues: the three theological virtues of faith, hope, and love {with love, the supreme virtue, at the top}, as well as the cardinal virtues of temperance, prudence, justice, and fortitude {two on either side of the throne}. Notice, again, this downward motion — these things come to us just as the Muses visited Milton — they are a gift, and not a work of man.

As we move down, Thomas Aquinas is front and center, upon the throne, with the Book of Wisdom open on his lap, flanked on either side by a total of ten biblical figures. Beneath Aquinas’ feet are three famous heretics: Nestor, Arius, and Averroes. The defeat of heresy is an interesting component of this painting, I think.

At the bottom, we have two rows. In the back row are the subjects, symbolized by women — the seven sacred sciences on the left and the seven liberal arts on the right — and seated in front of each subject is its captain figure. So, for example, Euclid sits in front of Geometry, and Tubal Cain in front of Music.

What I love about this painting is that I think the Book of Wisdom, open upon Aquinas’ lap, with the words, “And so I prayed, and understanding was given me; I entreated, and the spirit of Wisdom came to me. I esteemed her more than scepters and thrones; compared with her, I held riches as nothing,” {Wisdom 7:7-8} is the central thought of the whole scheme. So we have the Holy Spirit coming down and sending the gift of the virtues to us, making all of this possible, while the subjects are our upward reach — our best attempts to grasp and hold these divine gifts {or perhaps I should say to appropriately receive them} — and then the goal is Wisdom.

And I don’t just mean having Wisdom as a possession — I mean actually being wise. The wise heart values Wisdom over everything else. What man can be called wise unless he understands that this is the real value of Wisdom, that it is worth the sacrifice of all else?

Obviously, the fresco surpasses the tree, but the tree has the sort of simplicity we need, whereas the fresco can overwhelm and confuse unless time is given to studying and contemplating it. While faith, hope, and love are beautifully depicted as angelic beings in the fresco, I think that the idea of them being fruit on the tree of education is a worthy analogy as well.

One thing I’ve been pondering in my mind is whether piety is the same as the cardinal virtues — or at least whether it would include them. It’s an interesting question, at the least.

What sticks out to you about these two pictures?