How I Do Penmanship {Printing — Cursive — Copywork}

[dropcap]T[/dropcap]oday, I’m going to describe for you how I do penmanship. I’ve been doing it this way for six or seven years, so there is a possibility that there is a newer, hipper way to do it. Maybe there is an app for that. Or something. At the end of the day, the best way to do penmanship — and by this I mean teaching our students to print and to write in cursive and doing copywork as well — is whatever way that you can actually execute with consistency. 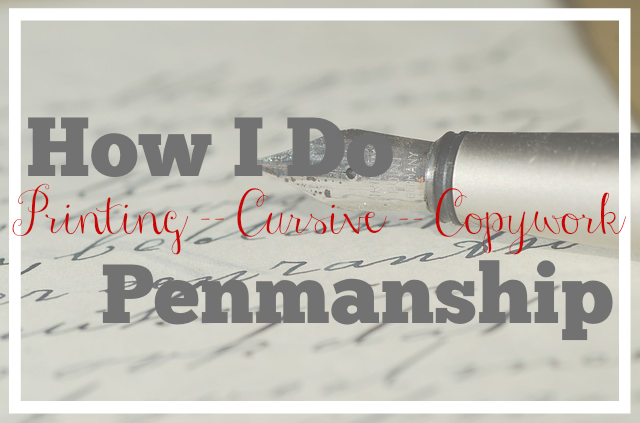 I suppose if I had to choose my top tip it’d be to buy a font. Really, everything I do begins and ends with a font I bought years ago when my oldest was in Year One. I bought my font from Educational Fontware. Since I’m still using it after all these years, saying I got my money’s worth is a bit of an understatement.

There is a huge selection. I chose Frank Schaeffer Style because it was close enough to how I actually write that I thought I could teach it without thinking too hard. {Remember, I was severely sleep deprived at the time, so this was a real concern.} If I write something in cursive and it looks different from what they have been taught, my girls question me, so having it be similar was important to me. I just knew these children would be like that!

You may have other concerns when buying a font. For example, if your child is left-handed, or if you suspect dyslexia or dysgraphia, and so on. If you buy one, buy one that makes sense to you.

{These were not affiliate links. I just really like my font!}

After this, I begin with one letter at a time. We learn the capital and small letters at the same time in order to reinforce that they are two ways of denoting the same letter. I’ve had some little ones really question me on this. The whole idea reeks of injustice.

Writing the letters on paper can be supplemented with writing them in the air, using a stick in the dirt, and so on.

We do one letter per day, and then after we know a few I alternate learning new letters with a page that reviews a few of the ones we’ve already learned. My goal is to get them through the basics of the alphabet as soon as possible so that we can get on to the real thing: the writing of actual words.

In fact, as soon as they know enough letters to write a few words, we do. We write simple words, like cat or Dad. No matter. We are really writing now!

After letter formation is mastered, we move to copywork worksheets. In the beginning, I select the passages that they copy, and I type them up using the same font I mentioned above. They might not finish a passage in a single day. That’s okay. Our goal is properly formed letters, properly spelled words, and proper punctuation, not a certain amount copied each day.

At first, I figured out the amount of time a child can handle writing, and then after that I set a timer. Over the course of Year 1, we work up to where the child can write for 10 minutes at a time.

Once the copywork is going well and the child can write the full 10 minutes, we move from copywork worksheets, where each line of text has a blank manuscript line below it, to copying from the text. I print out a blank page full of manuscript lines — my font has the option of creating these blank lines and what I like about this is that I can make them the exact size I think my students need — and they begin to choose their own passages and copy directly from a book to their pages, using a timer to make sure they do not write too long at any one time.

Graduating to a Commonplace Book

The above progression — from preliminary worksheets to copywork worksheets to self-selected worksheets — varies in how long it takes to get through. Some of my children moved through it quickly while it feels like others have taken forever. I considered teaching cursive first, or at the same time as printing, but practically it has played out that I teach printing fully and once they are doing self-selected copywork in print, then we begin the preliminary work for cursive.

It is my hope that by the age of 11 or 12, the child has mastered printing as well as cursive and is doing all of his copywork in cursive. At this point, I buy the child a commonplace book — I really think 12 is a great age to start this — and now he begins to build the habit of commonplacing like an adult. He selects his own quotes and adds the reference information. Instead of throwing his copywork away, he keeps it as a treasured notebook.

Here are a couple resources mentioned in the video below:

And here’s the video tutorial. Enjoy!

1. Ourselves 2. The Social Skills Guidebook 3. Nutrition and Physical Degeneration 4. What Jane Austen Ate and Charles Dickens Knew 5. Waverly 6. The Complete Father Brown Stories 7. The Lion and the Saint 8. Summer of Monkeys 9. The Ruins of Gorlan 10. The Boy Who Harnessed the Wind 11. The Burning Bridge 12. Northanger Abbey 13. The Icebound Land 14. The Lost Baron 15. The Baronet's Song 16. The Sea-Hawk 17. The Shepherd's Castle 18. Harry Potter and the Half-Blood Prince 19. The Boat Who Wouldnt Float 20. The Giver 21. Gathering Blue

Tonight, I prepped my lesson. Tomorrow, I begin my

Someone was a little annoyed with pre-algebra toda

What if you poured yourself out homeschooling your

Soul care on tap. Today I started reading this b

When you are the youngest child, the copy of TH Wh