Most of you know that I don’t eat added sugar. I started THM in 2014 sometime, and it’s been really good for me to stop the sugar. {Stopping sugar has also been super good for our littlest guy.} I actually didn’t eat much sugar before, but the whole plan has been good for me, and I’m sure the sugar abstinence is one reason why. Now, I do occasionally go out with friends and do a planned cheat, but it isn’t an option on normal days.

The problem is chocolate. I miss it. I didn’t eat a ton of it, but it was nice to have a nibble now and then, and unfortunately most sugar-free chocolate {actually most chocolate} has junk in it. Recently, however, I discovered Lily’s. Now, it’s super-expensive, so I don’t eat it often at all. I bought some with my birthday money, and today I had four little squares, and it. was. divine. Seriously. I couldn’t tell that it was sugar-free {of course, I’m pretty used to stevia}.

I only like milk chocolate — I’m not a dark chocolate person — but I put the image of three flavors there just in case you’re different from me. I know a few of you said that you were doing THM, too, so I thought you might want to put this on your birthday/anniversary/Mother’s Day/Christmas wish lists, too. I’m going to buy a bar or two for O-Age-Six for his birthday in August.

This drought is finishing off our landscaping … what was left of it. Last year, when we built the mother-in-law unit in the back, we had to turn off the sprinklers for a long time, and then a bunch of guys in big trucks drove on the back lawn every day for months. The lack of water killed the front and back yards both (the water had to be off because a crew accidentally cut one of the mains during trenching), and so our grass was history. The thing with bermuda grass is that technically it would revive … given enough water and fertilizer. But due to watering restrictions, that’s not happening.

I’m trying to maintain enough clover in the back to at least give us a green barrier between dirt and the patio. Clover is better than the alternative, which is nothing. But even that is starting to look too dry, what with triple digit temps every day. So now we have buckets in every sink and shower, and every drop of excess water is caught and carried out to our little strip of green in the back.

Sort of a pain, but then again I suppose it helps me reach my daily minimum goal of 10,000 steps. 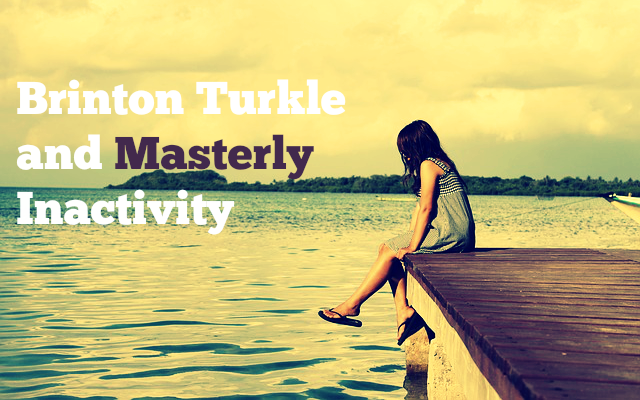 In his timeless picture book Obadiah the Bold, Brinton Turkle gives us the perfect illustration of Charlotte Mason’s concept of masterly inactivity. Click the image to read the post.

We’re enjoying our summer movie nights with the children so far. The 11-Up Club {population: 1, if you don’t include adults} enjoyed a viewing of Hugo. There isn’t anything wrong with it in the sense of having younger children view it, but we used it for the 11-Up Club because it’s so serious and honestly I think the girls would have incessantly asked questions about what was happening. It’s mature in content, I guess is what I’m saying. Anyhow, it is beautifully and artistically done. Not just for children, especially if you like steampunk.

Tonight is the 7-Up Club {population: 3}. They are watching A Little Princess. The girls both read the book recently, and E-Age-13 really liked the book back when he was a little boy. However, comma, he and his dad joked about going out to do something else, instead of watching the movie, so I suppose there is a possibility of this turning into something of a Girls’ Night. We’ll see.

For some summer handicraft fun, I’m using these great worksheets from The Postman’s Knock. It’s called Learn Hand-Lettering for  Latte, and that’s because this nifty little product only costs five bucks. I like to do fancy lettering for headers in my bullet journal, and I’ve considering trying to teach myself new fonts, but spacing is such an issue for me, and it takes me time to figure out the best way to pull it off, especially if the font is complex — I thought that having a teacher would speed up the learning process. So, I invested a few bucks in my hobby, and I can print off some copies for the children if they want to join me, which will be fun.

AmblesideOnline Year 7 Living Science: Why We Loved It {A Curriculum Review}

A Tale of Two Pictures