Gymnastic: Because Students Have Bodies

[dropcap]I[/dropcap]t’s a coincidence that I planned our drill time and posted about physical education on Monday. I hadn’t written this post yet, nor considered how beautifully the two dovetailed. It’s fun when life happens that way — when theory meets reality unplanned. 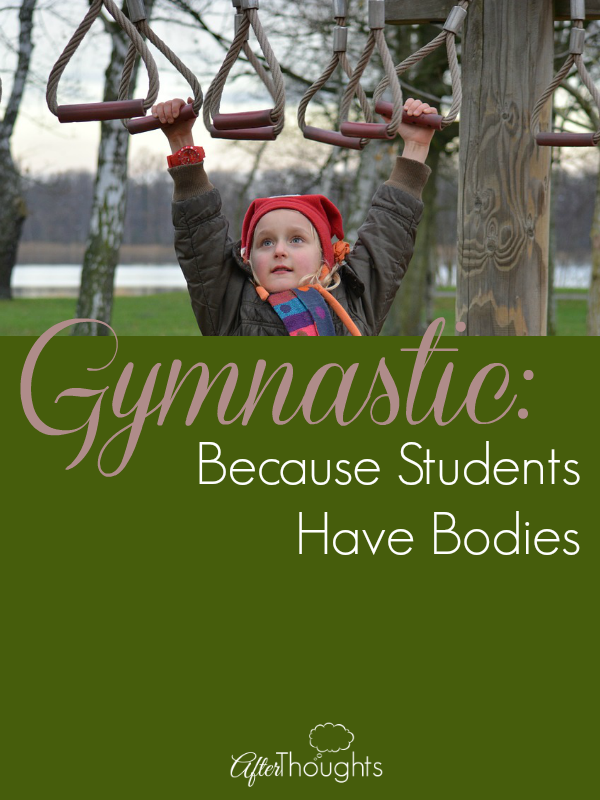 Today we’re discussing part of a chapter from The Liberal Arts Tradition called Gymnastic and Music. We’re going to focus on gymnastic and save music for a future post. It’s probably important to note, however, that both of these are a form of poetic knowledge and the chapter expresses so beautifully some of the core ideas from my favorite book ever, ever, ever, Poetic Knowledge by James Taylor.

So anyhow, have you ever noticed that students have bodies? I mean, we’d think it should be obvious, but I know that when I first started thinking about education, my thinking was almost completely limited to the intellect — the mind — and the purely academic subjects. When our children ended up with severe allergies, I did notice that eating foods to which they were allergic caused not only a reaction in the body, but in the mind and neurology as well, but it really wasn’t until reading Charlotte Mason that I really began to consider the part the body had to play in education.

But I’m getting ahead of myself. Let’s start by seeing what Kevin Clark and Ravi Jain have to say. First, what is gymnastic education?

Gymnastic training is concerned with the entire physical conditioning of a child. It culminates in competitive running, swimming, wrestling, etc., but includes the rudiments of control over the body as well.

The reason why this matters — why this is considered a part of education — is because students have bodies: 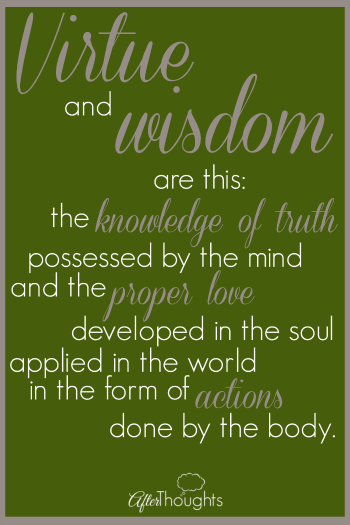 The goal of classical education is to develop a certain kind of person. Some call this virtue {here I’m thinking of folks like David Hicks} while others call it character {Charlotte Mason, anyone?}. In aiming for virtue, we cannot develop the mind and soul while excluding the body. Not only is this a denial of the physical nature of man, it also fails to admit that virtue and wisdom are this: the knowledge of truth possessed by the mind and the proper love developed in the soul applied in the world in the form of actions done by the body.

Virtue is action. It’s not a thought in the mind or a hypothetical sentiment of the heart.

This is why Clark and Jain say:

[T]he students whose minds [educators] are informing have hearts and bodies as well, and … education must in some sense address each of these aspects of their humanity.

Charlotte Mason and the Making of Heroes

Since the premise of this series is that The Liberal Arts Tradition is basically presenting the exact same philosophy of Charlotte Mason, let’s briefly explore what Charlotte Mason thought about gymnastic — of physical education.

First and foremost, physical training in a Charlotte Mason education rests on a single principle: ye are not your own. In her third volume, she reaches back to … wait for it … the gymnastic education of the ancient Greeks! {See how we are always ending up on the same page?} The goal is nothing less than the making of heroes. She wrote:

[T]his was the object of physical culture among the early Greeks, anyway. Men must be heroes, or how could they fulfil the heavy tasks laid upon them by the gods? Heroes are not made in a day; therefore, the boy was trained from his infancy in heroic exercises, and the girl brought up to be the mother of heroes. {Volume 3}

Do you see what she’s saying? The Greeks belonged to their gods, and they trained their bodies so that when they were called upon to serve, they were able. She extrapolated this to apply to the Christian life as well:

The object of athletics and gymnastics should be kept steadily to the front; enjoyment is good by the way, but is not the end; the end is the preparation of a body, available from crown to toe, for whatever behest ‘the gods’ may lay upon us.

And later, in order to be perfectly clear:

‘Ye are not your own’; the divine Author of your being has given you life, and a body finely adapted for His service; He gives you the work of preserving this body in health, nourishing it in strength, and training it in fitness for whatever special work He may give you to do in His world…

She presents a strong ideal here, and at its core it is motivated by the vertical and horizontal loves: love of God, and love of neighbor.

Not the Body Only

Another commonality between Clark and Jain and Charlotte Mason is the idea that training of the body can have real, spiritual benefit. This is why Clark and Jain called it “training bodies for the good of the soul.” They point to these moral and spiritual applications of gymnastic:

The proper use of one’s body is central to the moral and spiritual life. There is a profound resonance here with the classical notion of the virtues. With respect to courage, for example, thinkers such as Aristotle considered it axiomatic that a man with an undisciplined body would find it difficult to be brave.

Likewise, Charlotte Mason believed that proper physical training developed self-control, self-restraint, and self-discipline. She even pointed out that aspects of fortitude, service, courage, prudence, and chastity were all developed through gymnastic. And it makes sense, right? Seeking virtue and avoiding vice require a mastery of the body and a sense of duty toward God and neighbor.

What about you? What stuck out to you in this portion of the chapter?