Music and the Poetry of Education

[dropcap]I[/dropcap]t is easy to hear the phrase “musical education” and assume we’re talking about piano and violin lessons, with a bit of tonic sol-fa thrown in. While this is the beginning of what is meant by music as a liberal art, music here — as something that precedes the liberal arts — means something deeper and more basic. Clark and Jain, in The Liberal Arts Tradition, call it “foundational.” 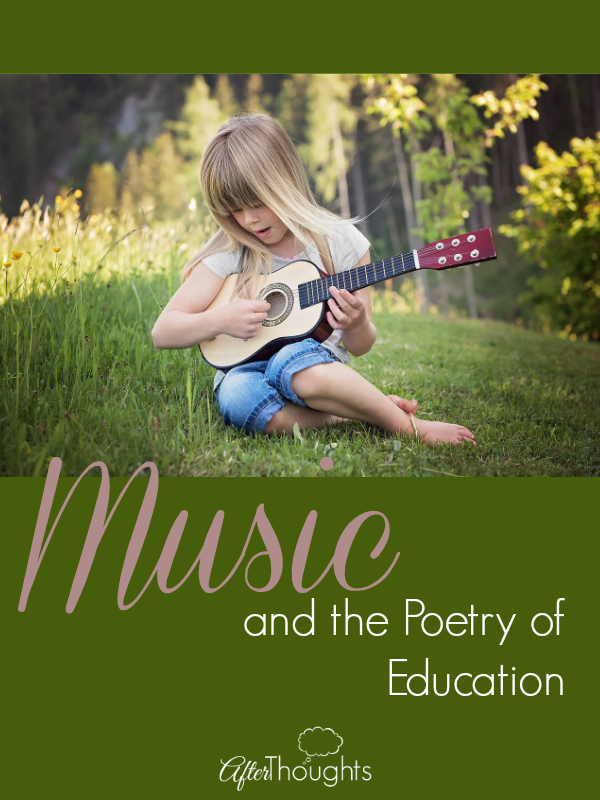 It studied all the subjects inspired by the Muses {from epic poetry to astronomy} in a pre-critical manner. … They taught passions more than skills and content. They sowed the seeds which would grow into a lifelong love of learning. {p. 5}

Later, they explain that musical training is

directed toward forming this “middle element,” the heart, the moral imagination. {p. 27}

According to Clark and Jain, Christian classical schools are already doing this — they are just using the wrong words for it. Listening to Dorothy Sayers and Doug Wilson, these schools call what they are doing “grammar” — they say they are learning the “grammar of music” or the “grammar of science,” which leads them to the mistaken belief that children are actually studying the liberal arts in kindergarten and first grade. {p. 28}

I remember the first time a friend of mine said that “there is no such thing as a classically educated child” and I gasped audibly. But this is exactly what she meant: the liberal arts aren’t for little children, and there is something Other and Necessary that precedes them.

This is why John Senior wrote:

Clark and Jain go on to declare:

Our position is as follows: while schools in the Christian classical renewal have imagined themselves to be teaching grammar {or one or more of the seven liberal arts} in very creative and effective ways — chanting US states, grammatical rules, names of president; dressing as flowing-haired Achaeans and attacking hapless Trojans from a wooden horse; drawing pictures of creatures whose names begin with the letter we have just learned — they have actually been engaged in the truly classical enterprise of musical education. {p. 28}

But then they end the section with this poignant question:

Imagine the possibilities of thinking of these areas of the curriculum as musical education rather than the “grammar of — “. History would not be so many facts to memorize however creatively we do it but an opportunity to use stories from the past to build up a child’s moral imagination …

I have never been inside a Christian classical school. I have never seen this sort of thing in action. But what is described — chanting lists and rules — does not sound representative of the poetic ideal much at all. I mean, maybe, perhaps, in a teensy-tiny way, they kinda sorta do? Like maybe they are one little piece of the big puzzle of a musical education? I think that Clark and Jain pointed the way with their question — imagine if — but they did not then extrapolate what the practical would look like if we started from the question itself.

The reason why I subtitled my post “and the poetry of education” is because what Clark and Jain are calling a musical education is what James Taylor calls Poetic Knowledge {in my favorite book ever, ever, EVER} and what my friend Karen Glass, in her remarkable little book Consider This: Charlotte Mason and the Classical Tradition, calls Synthetic Knowledge — and Karen connects this to Charlotte Mason’s assertion that “education is the science of relations.” These are all different names for the same thing.

I think that Clark and Jain are absolutely correct when they say that the musical — or poetic, which is how I usually refer to this here on the blog — mode of learning is rooted in wonder and that it ought to bear fruit in the form of a lifelong love of learning. I believe they are correct when they say that it’s a training of the passions of the heart and that an effect of it is the formation of the moral imagination.

What I think they left out was the idea that it is based on wholes — on the oneness of all knowledge.

[P]oetic knowledge is not necessarily a knowledge of poetry but rather a poetic {sensory-emotional} experience of reality. … What must be at the beginning of this understanding is the phenomenon of poetic experience. Poetic experience indicates an encounter with reality that is nonanalytical, something that is perceived as beautiful, awful {awefull}, spontaneous, mysterious.

[I]t is … knowledge from the inside out, radically different in this regard from a knowledge about things. {pp. 5-6}

He goes on to specifically describe this as the opposite of scientific knowledge — that it is necessarily non-analytical and focuses on wholes rather than parts.

This is why Karen Glass writes:

Analysis should not be our primary approach to knowledge or our primary mode of thinking, especially in the earliest years of education. We should not begin taking apart the things that we learn until we have put them together first, and so solidly unified our understanding of the world that we will not lose sight of the relationships between things when we do begin to analyze. {p. 35}

And this is why Charlotte Mason declares:

A child should be brought up to have relations of force with earth and water, should run and ride, swim and skate, lift and carry; should know texture, and work in material; should know by name, and where and how they live at any rate, the things of the earth about him, its birds and beasts and creeping things, its herbs and trees; should be in touch with the literature, art and thought of the past and the present. I do not mean that he should know all these things; but he should feel, when he reads of it in the newspapers, the thrill which stirred the Cretan peasants when the frescoes in the palace of King Minos were disclosed to the labour of their spades. He should feel the thrill, not from mere contiguity, but because he has with the past the relationship of living pulsing thought; and, if blood be thicker than water, thought is more quickening than blood. He must have a living relationship with the present, its historic movement, its science, literature, art, social needs and aspirations. In fact, he must have a wide outlook, intimate relations all round; and force, virtue, must pass out of him, whether of hand, will, or sympathy, wherever he touches. {p. 162}

If I was asked to make a list of practical expressions of this musical, poetic mode of education, I would say this:

It’s really not fair to call this my list. This is just my regurgitation of all I’ve read from James Taylor, Karen Glass, John Senior, Charlotte Mason, and more — I’m just an Afterthinker, after all, you know.

My thought is this: If the goal is a development of taste, the training of the loves of the heart, the fertilization of wonder, we have to get away from the idea that grammar chants have this effect. I’m not saying they’re bad or whatever. I’m saying they aren’t poetic and they don’t touch the heart, even if children are having a blast doing it.

I’m not saying this because I’m an expert on anything. I’m saying this because whenever great thinkers like James Taylor point to examples of what not to do — what is not the poetic mode — they point to things like grammar chants. For starters, they aren’t beautiful. Says Taylor:

It was from Socrates, to Aristotle, to Augustine, that we learned there must be something of the beautiful embedded as a universal in the particular object that gives rise to wonder and delight for there to be poetic experience.

It’s sort of like I said in my talk, Memorization and the Soul. I don’t really care if you memorize lists of facts, but all the other stuff — the songs and poems and the lengthy passages and famous speeches and the ability to retell beautiful stories and describe beautiful pictures — this is the stuff of music and poetry, and this is the stuff that must take priority. And if, in all that leftover time, there is a deep desire to memorize a list of the Presidents of the United States, I give my blessing. 😉

Needless to say, I wish Clark and Jain hadn’t been so quick to say “we’re already doing it” and rather tried to answer their own imagine if question. What does an education steeped in wonder, with the power to develop a moral imagination look like? Let’s start with that.

Of course, I think there is a sense in which it could take a lifetime to formulate an answer.

Creating Weekly Schedules for the Entire Year (A Planning Post)