Piety: Where Education is Grounded

[dropcap]T[/dropcap]he first “real” chapter of The Liberal Arts Tradition is about piety, for which Clark and Jain offer this simple definition:

[P]iety signifies the duty, love, and respect owed to God, parents, and communal authorities past and present. It connotes the cultivation of faithfulness in relationships and commitment to one’s tradition as historically situated in place and time. 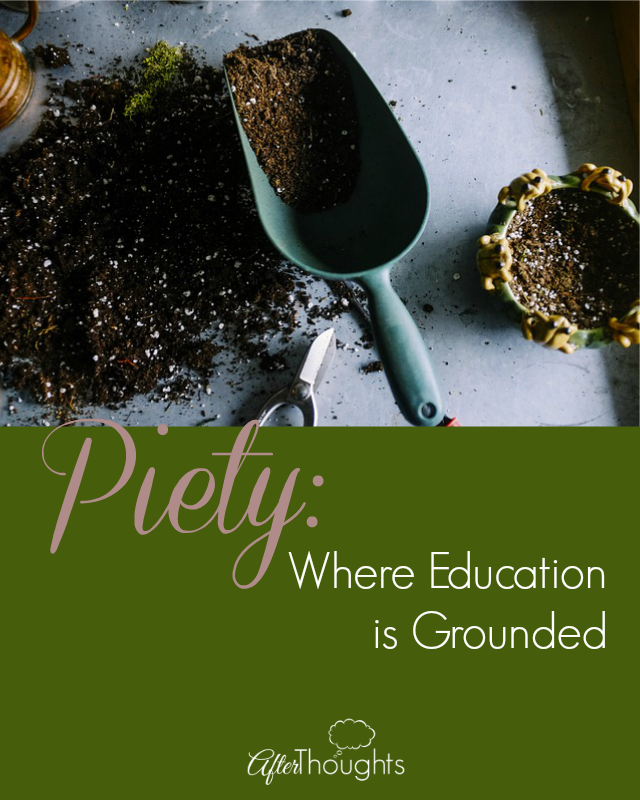 The idea that piety involves duty to the past is something infused throughout the piety chapter in The Liberal Arts Tradition. Our “delight in slaying the past” and “rejection of the past” is mentioned a number of times. Piety according to Clark and Jain most definitely involves a robust relationship with history and tradition.

Piety’s closest synonym might be duty, and it is here that we see a connection to Charlotte Mason. While she used the word piety only infrequently, the word duty is used many times in her many volumes. And duties, of course, are defined by one’s relationship not only to God and to neighbor but to the past.

It is possible that piety a la duty is the essence of the somewhat famous motto of Miss Mason’s schools, “I am, I ought, I can, I will.” That “I ought” is central. Children who had no conception of duty grieved Miss Mason greatly:

[W]ho has not met big girls and boys, the children of right-minded parents, who yet do not know what must means, who are not moved by ought, whose hearts feel no stir at the solemn name of Duty, who know no higher rule of life than ‘I want,’ and ‘I don’t want,’ ‘I like,’ and ‘I don’t like’? Heaven help parents and children when it has come to that! {Vol. 1, p. 14}

In her sixth volume, Miss Mason definitely connects the training of the will that she promoted to the fulfillment of duty:

Duty and service are the sufficient motives for the arduous training of the will that a child goes through with little consciousness. The gradual fortifying of the will which many a schoolboy undergoes is hardly perceptible to himself however tremendous the results may be for his city or his nation. {Vol. 6, p. 137}

Clark and Jain go so far as to define piety as godliness and explain that ultimately it is the subjection of the will to God. Miss Mason agrees here as well:

[W]e like the … use of the word ‘commandment,’ which concedes the whole question at issue — that is, that the idea of duty is a relative one depending on an Authority supreme and intimate, which embraces the thoughts of the heart and the issues of the life.

While Clark and Jain do not go deep into the practicalities of teaching or developing piety in our students, they do mention the attitude a student needs to have towards his teacher, the role of proper manners, and even the process of choosing curriculum. Indeed, they point to submission as the key characteristic of the ideal student:

Without the students internalizing a fundamental respect for God, their teachers, parents, and elders, the entire process of education likewise fails. When it comes to the critical moral and ethical truths, a child must be open to submission if he is to learn anything. A child in a state of active or passive rebellion will never be enculturated in a way consonant with the tradition.

Miss Mason, too thought that teachableness — she uses the word docility to mean this in the passage below, and that is the essence of the concept of submission in regard to education — and the proper relationship between teacher and student was important. One thing I appreciate about Miss Mason — and Clark and Jain likewise hint at this — that it is not only the students who are under Authority — we all are under Authority, and the teacher who does not conduct himself as one under Authority is miscarrying his responsibility:

The higher the authority, the greater distinction in obedience, and children are quick to discriminate between the mere will and pleasure of the arbitrary teacher or parent and the chastened authority of him who is himself under rule. That subservience should take the place of docility is the last calamity for nation, family or school. Docility implies equality; there is no great gulf fixed between teacher and taught; both are pursuing the same ends, engaged on, the same theme, enriched by mutual interests; and probably the quite delightful pursuit of knowledge affords the only intrinsic liberty for both teacher and taught. {Vol. 6, p. 71}

The Various Benefits of Clark and Jain, and Charlotte Mason

I think that Clark and Jain part company with Charlotte Mason in terms of emphasis, and this is where both philosophies shine in their own way.

For Charlotte Mason, she lived before the West was “fundamentally impious” {which is how Clark and Jain describe us today}. She was still clear and at rest in Duty, and she inspires us to train it in our students. She is a master on the topic. The first two chapters of her third volume, both titled Authority and Docility, as well as the fourth chapter of her sixth volume {also called Authority and Docility} — to say nothing on her chapters on authority in her book Parents and Children — if you want to understand the relationship between parent and child, or teacher and taught — between one in authority {who is still under Authority} and one under authority — I cannot point you to a better resource.

Clark and Jain live today, on the other hand. And so they speak of our loss of tradition — of how our lack of tradition leaves us at a loss and causes the “fundamental impiety” of which they speak. They have not mentioned it yet — perhaps they never mention it — I don’t know — but what they write points very obviously to a need for learning on the part of we who teach and we who parent. How much has been lost, even in the one hundred years since Charlotte Mason wrote! How little we know, and how little we have to pass on to those we teach.

While Miss Mason stands confidently in a long tradition, Clark and Jain stand where we stand, feeling our own weakness and ignorance. So, yes, we fortify the will, and we teach duty to the best of our ability, but also we must study. This is not such a bad thing, for even Miss Mason said that docility implies equality and that there is “no fixed gulf” between teacher and taught. How true that is today, where so many of us graduated high school and college with very little worth passing on to others.

If we see this situation rightly — if we admit how very little we know in comparison to our forebears — then at least we start from the right place: humility.