We finally found a wart remedy that worked for our two older children. We’ve tried various things over the years. Raw apple cider vinegar overnight worked well, but they would always eventually grow back. When I was reading through some of my many books on homeopathy, I noticed that Thuja 30 was one of those universally recommended remedies. Homeopaths vary on a lot of details here and there, but Thuja is recognized as a wart remedy — it’s kind of like how everyone knows Arnica is a good first place to start for head and sports injuries.

So anyhow, because of taking a class with Joette Calabrese, I’m very influenced by Banerji-style homeopathy rather than classical. It’s not to the exclusion of classical, of course, but it is a different way of thinking about it. Since “mad scientist” is an actual job description for INTP’s like me, it probably won’t surprise you that I decided to experiment. I put A-Age-10 on Thuja 30 twice per day. Four weeks later, I started E-Age-13 on the same. Now, Daughter A’s case was much more severe than Son E’s, which is why I went ahead and started him on it even when Daughter A’s didn’t look like anything was improving.

Two weeks later, we were running out of stock and so I asked them to show me their warts so that I could decide whether or not to reorder, and how much. To their surprise, neither of them could find any warts on their hands! So they are officially wart-free, and I didn’t need to reorder, after all.

Now this is the part where I tell you I’m not a doctor and this is no substitute for medical advice. But I think you already knew this was just a mom sharing something that worked on her children.

Today is my husband’s birthday. He is two months younger than me. When we were in our twenties, he would pretend my birthday was his birthday. What I mean is, even though his birthday was two months from mine, he always gave the same answer I did. He didn’t want me to be older, I guess. {Either that, or, being a twin, he was just used to being the same age as the person he lives with. Ahem.} Now that we are in our late thirties, this no longer happens, and instead I have to listen to him talk about how “old” I am for two straight months. I think that, for my fortieth birthday, I shall go live at my favorite beach for the duration so I don’t have to hear about it.

Anyhow, the kids bought all of the ingredients to make him his favorite ice cream, which is Mystie’s Intense Coffee Ice Cream. They are going to make it this afternoon, and then I’ll put it into a chocolate graham pie crust and we’ll have ice cream pie for dessert. This is my husband’s favorite dessert, and I usually save it for his birthday. 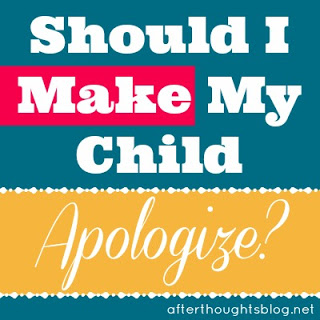 I finished up a three-part series on making children apologize when they’ve done wrong. The graphic goes to the last post. Click here if you want to start at the first post.

My favorite memory from this past week was super simple. We left the house early {8:30 am}, to beat the heat, and spent an hour walking one of our local bike paths, which is adjacent to a painfully dry riverbed. Nonetheless, A-Age-Ten managed to find some local wildlife — as she always does. After that, we made a quick drive to the Starbucks near where my husband works. He hopped over during his morning break, and we all had a treat together. I found myself thinking we should do this more often!

I’ve got a few projects in the mix right now. I think this means I’ll be taking a week or so off sometime before the summer is over. Not sure quite yet. First and foremost, I have three talks to write for the Northwest Charlotte Mason Educators Conference. I’ve been doing the research and the thinking for a long time now, but it’s time to start putting pen to paper. Raise your hand if you’re going to be there!

Gymnastic: Because Students Have Bodies

Creating Weekly Schedules for the Entire Year (A Planning Post)