I want that one!

I don’t want to watch that!

I want the blue one 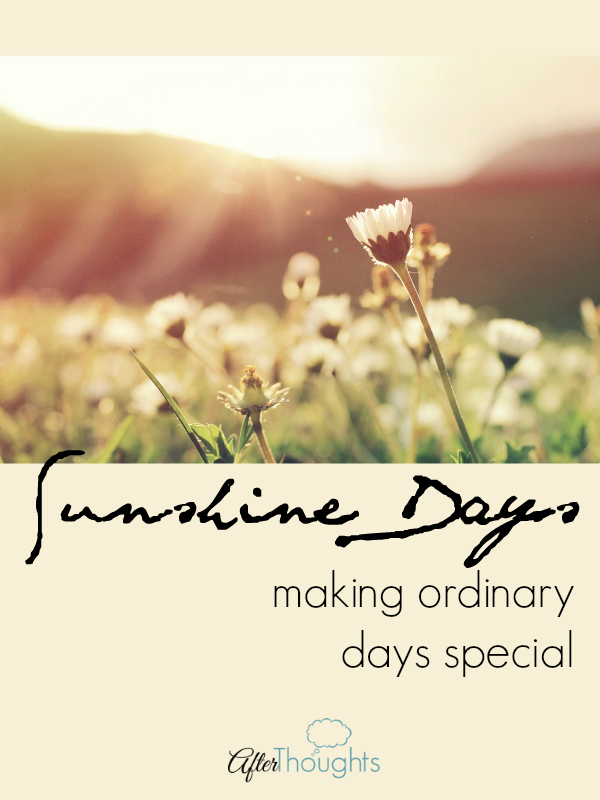 When my oldest daughter was three-and-a-quarter, and my second was almost two, the above phrases began in our family on a recurring basis. In trying to figure out how best to help our little girls share and take delight in sometimes giving in and not getting their own way AND without any tears or tantrums that follow, we officially declared May 2, 2011 to be Day 1 of “Sunshine Day” in our home.

Sunshine Day means each child has a day that is declared their Sunshine Day, rotating through all the children

On YOUR Sunshine Day you get to decide if YOU want the blue cup, and guess what? You’ll get it! If YOU want to get in the car first, you do. If you want to open the door, then you get to do it. No scrambling to knock anyone out of the way, and no objections. If you want the plate that is the exact same as the one next to it, with the exact same designs on it, but you particularly want the one on the left opposed to the right, then you get the one on the left. No questions asked. If we’re taking a photo and you want to hold the baby for the photo, then it’s inevitable you will hear the question,

Whose Sunshine Day is it?

Sunshine Days have worked like a dream in our home.

I admit, at first, I was reluctant to start. How, after all, was this Sunshine Day thing going to address the heart? And then, what about birthdays and making those days the special days? But I realized Sunshine Days just affect those inconsequential matters, while we continue to work on our heart attitudes. It’s not that if it is your Sunshine Day you get to decide what we’re eating or where we’re going. It’s just little things that creep up and be able to respond to the inevitable “I want that one!” when there are two others that also want it.

Sunshine Day has given us a tool to work immediately on being selfless — if it’s not your day, the children have just accepted it without any grumps or groans. And they’re even able to recognize that. in another day or two, it will be your Sunshine Day and you’ll get to go first, or have the colour cup you want, or be the child to run errands. All the while, this allows for every child to have their turn without getting lost in the shuffle of family life, and experience the other days of finding joy in their sister or brother having the choice.

Of course, it goes without saying, the more children we have, the less often Sunshine Days come around. And, that’s OK!

We found almost immediately with implementing Sunshine Days that if it wasn’t their Sunshine Day, but it is their day to set the table, the girls were initiating the question,

It’s your Sunshine Day, which color [cup] would you like?

Whenever there is a squawk over something, I just ask “Who’s Sunshine Day is it today?” and that can generally settle it fair and square! And give me a moment, with emotions settling down, to talk about their heart. Now, there are times when someone just digs their heels in and doesn’t care that it’s another person’s Sunshine Day, they’re just going to throw that little fit-filled tantrum. I give my child a reminder that it isn’t their Sunshine Day, and if the fit-throwing tantrum continues, then they forfeit their Sunshine Day when it comes up next. In four years, I have only had to do this 5 times. I really can attest that it has given my children the tool to be gracious, even when their selfish little heart wants it their own way. And it keeps emotions at bay, giving us an opportunity to talk.

From the rising of the sun (ch-ch-ch-ch-ch), to the going down of the same (eeee-oooo-eeee-oooo), the Lord’s name is to be praised.

This comes directly from the Bible (Psalm 113:3) and reminds us to praise the Lord from beginning to end, for that is really far more important than anything else, even who’s Sunshine Day it is today!

Hayley was born and raised in Australia, swept off her feet by a Yankee, and now resides in California with her husband of 22 years. They have seven children ages 12 and under. For more about Hayley visit A Mum's Bouquet.