Trivium: The Threefold Curriculum of the Language Arts

[dropcap]N[/dropcap]ow that Kevin Clark, one of the co-authors of The Liberal Arts Tradition, has explained to us what the liberal arts are for {or, at least, part of what they are for}, let’s talk about what they are. 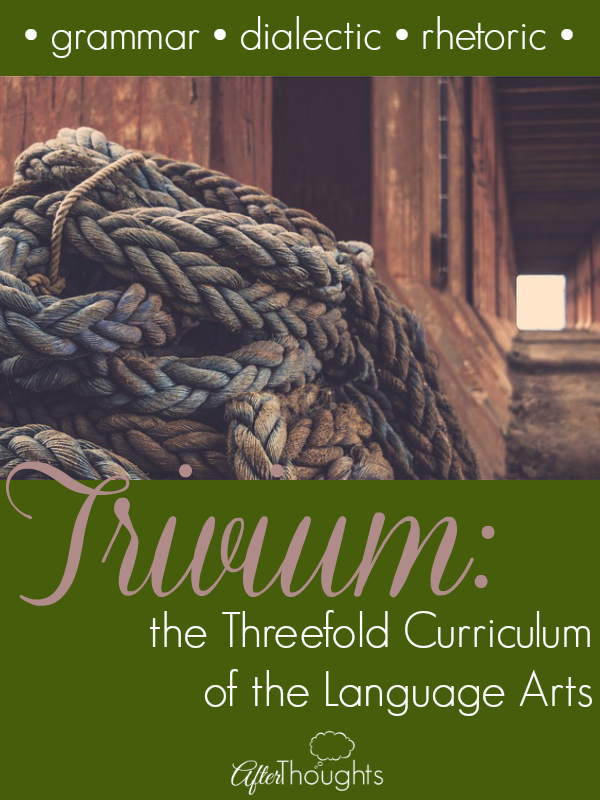 Out of these three, I think that only rhetoric is generally known for what it is, and even then there is a sense in which we tend to think of rhetoric in terms of manipulation and technique rather than something that might be used by a respectable Christian.

Grammar is big. It includes basic phonics and letter formation, but it isn’t mastered — or maybe it is better to say that we aren’t mastered by it — until we can read great books in the original languages.

Yep. That’s right. According to Clark and Jain, grammar {as well as rhetoric} would necessarily include the study of the classical languages. Personally, I think the argument they make in their book is excellent. I’m not going to go deeply into it, though, because Mystie has already done the legwork for us on this subject. She not only explains the argument Clark and Jain make, but she also compares it to Karen Glass’ book Consider This: Charlotte Mason and the Classical Tradition. I highly recommend Mystie’s post!

What I want to focus on is how big grammar is, because I think this is where we tend to get it wrong — thinking of grammar as basic rules or something rudimentary. Clark and Jain write:

Consider, for example, what a reader should know in order properly to interpret the Aeneid, and one will intuitively grasp the nature of grammar in its classical sense.

We moderns have reduced dialectic to logic, but those two things are not the same, though they are related. Like grammar, our modern view is too small — logic is too small. Dialectic is bigger — and it’s more human.

Dialectic involves developing good reason, and this isn’t about syllogisms. At its core, it is a language art, not a mathematical one. In dialectic, we learn to reason in relationship with others through good dialog. Dialectic, Clark and Jain remind us, isn’t so much about having all the right answers:

[T]he key to success in reasoning is the ability to ask the right questions.

The hope is that the student thus learned in the art of dialectic will know which questions are worth asking, and which are worth answering.

It is Cicero, we learn, who ultimately defined the purpose of rhetoric as

movere, docere, delectare — ‘to move, to instruct, and to delight.’

What I thought was most interesting is that rhetoric necessitates a good man — imagine such a weapon wielded only by evil politicians and marketing companies with something to sell.

Another interesting component of rhetoric is that, in order to persuade, we acknowledge human nature as a whole. This is why Clark and Jain tell us:

It is directed toward speaking the truth, but governed by an understanding that appealing to the whole person — mind, will, affections — is legitimate.

What Does Charlotte Mason Say About the Liberal Arts — and Specifically the Trivium?

In her volumes, Charlotte Mason only uses the proper term “Liberal Arts” in regard to her beloved fresco, which we discussed here. Her focus in those instances is always upon God as the fountain of all knowledge and truth, rather than on the specifics of the arts.

So we must search elsewhere to find out what she thinks about these subjects.

Miss Mason refers to grammar mostly in the modern sense — of instruction in the rules surrounding the use of words in both English and Latin. The question, though, is not really how she uses the word “grammar” but whether or not she embraces the classical understanding of it — whether she was moving her students in the direction of being educated in the classical sense.

I would say that she does, though it is not so formal as we might think because she taught children and, as such, she was very entrenched in the poetic approach. But, poetic or no, if the goal of grammar is ultimately to read with understanding, those who have used her methods know that she moves students {and their teachers!} in this direction very effectively.

Let’s take narration as an example. Starting with a small six-year-old, we begin paragraph by paragraph {or sometimes even less than that} — the child learns to listen well and then to tell back, in his own words, what he has heard and understood. As this practice continues throughout the years, the Charlotte Mason student comes to have remarkable skills of apprehension, and their trained attentions can, upon a single reading, take in, assimilate, and reproduce the major points of a text.

Likewise, the Charlotte Mason syllabus, with its generosity and breadth, offers to its students the background knowledge required for the level of reading comprehension we are talking about here — the ability to understand what other things authors are alluding to.

Narration is truly unique because as children grow, it naturally starts students on the paths of dialectic as well as rhetoric. In the retelling and essay writing of the upper grades, early rhetoric begins, while the art of asking questions is also considered one of the uses of books.

In addition to this, we cannot forget Miss Mason’s extensive writing on the Way of Reason. Nor ought we overlook that her Latin instruction was such that she expected a 12-year-old to “read fables and easy tales, and, say, one or two books of ‘Caesar.'”

In all, I think it is clear that Charlotte Mason was setting the stage for the Trivium. Because she believed that childhood education should be mostly musical and gymnastic, we aren’t going to see a lot of formal study, but that she was aiming for a truly liberal education is, I think, undeniable.

I love how nicely all of this dovetails, don’t you?

A New Rhythm for Circle Time {A Planning Post}