[dropcap]I[/dropcap] don’t know about you, but most of the arguments made to me throughout the duration of my own education were painfully practical. “Learn this — you might need it someday.” Not being a very practical person myself, I found that sort of thing hollow and unmotivating. Now, if someone had said something cryptic — something like, “Pay attention, for herein lies wisdom” — then I would have been all eyes and ears. 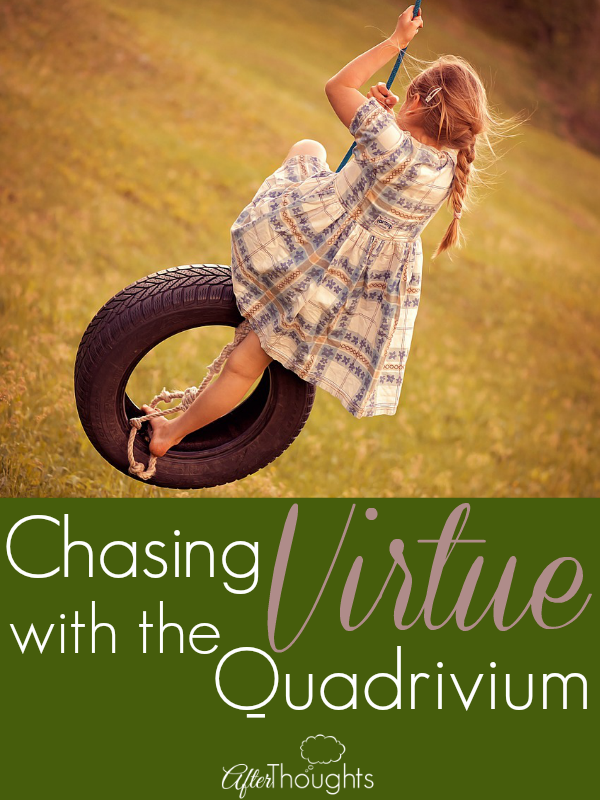 Before we get deeper into the details of the Quadrivium {in future posts}, let’s spend today focused on what the Quadrivium is and also what it’s for — according to both The Liberal Arts Tradition, as well as Charlotte Mason {because, if you are just joining us, comparing the two is the point of this series}.

What is the Quadrivium?

The four arts of the Quadrivium are arithmetic, geometry, music, and astronomy. A quote in the footnotes of the chapter reminded me of the CiRCE definitions page, which I high recommend if you are trying to get a handle on all of this classical stuff for the first time. In regard to the arts of the Quadrivium, CiRCE explains:

Notice that all of these questions are questions of truth and reality — they are descriptive and observable. These are not private truths.

What the Quadrivium is For

It was music to my ears to read Ravi Jain declare that the usefulness of mathematics, for example, is not a good enough reason to study it:

Christian classical schools must uphold a high standard for mathematical education precisely for its special role in human formation and developing the virtue of the mind.

With its absolutely pure objectivity, mathematics had some special benefits:

By training one’s thoughts on the perfection of mathematics the mind learns to transcend the level of changing opinions to identify objective truth.

I remember once telling a friend in high school that while I love to write, there was something special about math homework {as compared to writing a paper} — with math, you could be done. You could find a final right answer. Absolute truth is possible in math.

And Ravi Jain {who wrote the Quadrivium chapter} tells us that this is exactly it. The original purpose of the Quadrivium, he says, was

to lead the mind to the realm of eternal and unchanging truths.

This is not to say, of course, that we completely reject the practical side:

A tradition liberal arts education should encompass both of these perspectives: the useful and the formative.

Charlotte Mason and the Quadrivium

Charlotte Mason never uses the word Quadrivium in her volumes, and it’s only mentioned a few times in the Parents’ Review magazine that she edited {and never by her}. Does this mean that she has nothing to say on the subject? No, but we do have to piece it together from what she said about the individual arts themselves.  We’ll go into this deeper in future posts, so for now all we need is a broad overview. Specifically, did Miss Mason have her students study these arts? And, if so, does she ever explain why?

The first question is easy to answer. By looking at her old PNEU programmes we clearly see that these arts were covered in the curriculum — arithmetic from the earliest days, Euclid himself {for geometry} in the upper years, music from early days, and astronomy in the upper years as well.

I thought for many years that Miss Mason was weak on math — not in practice, but in her philosophy. And she does say, even in her final volume, that it seems that some people will never really have an affinity for math. But she did see arithmetic as opening the door to absolute truth:

The child whose approaches to Arithmetic are so many discoveries of the laws which regulate number will not divide fifteen pence among five people and give them each sixpence or ninepence; ‘which is absurd’ will convict him, and in time he will perceive that ‘answers’ are not purely arbitrary but are to be come at by a little boy’s reason. Mathematics are delightful to the mind of man which revels in the perception of law, which may even go forth guessing at a new law until it discover that law…

Like Jain, Charlotte Mason thought that we needed a better argument than the practical if arithmetic were to keep a chief place in the curriculum:

We take strong ground when we appeal to the beauty and truth of Mathematics; that, as Ruskin points out, two and two make four and cannot conceivably make five, is an inevitable law.

Miss Mason was a firm believer in Euclid, and she had her students studying his Elements starting around what we would call the seventh grade. She generally included geometry in any arguments she made concerning math in general, and so the points made above about beauty and absolute truth apply here as well.

Miss Mason began the study of music at young ages. Using both piano as well as tonic sol-fa, Miss Mason believed that children could and should learn to read music for themselves and to make the proper hand signs. She did not believe that, in the context of her classrooms, she could cultivate a true performer, but she did believe that she could give children an ear for music and a “cultivated and correct ear.”

The majority of Miss Mason’s thought on music are focused on the development of the aesthetic sense and taking delight and joy in well-crafted music. I do not see a lot of evidence in her writings that she made the connection between music and math.

Miss Mason’s goal with astronomy was the same as her goal with any science:

[T]he whole circle of the sciences is, as it were, set with gates ajar in order that a child may go forth furnished, not with scientific knowledge, but with, what Huxley calls, common information, so that he may feel for objects on the earth and in the heavens the sort of proprietary interest which the son of an old house has in its heirlooms.

She includes an astronomy lesson in her third volume — the focus was naked-eye astronomy, of course — and her goals listed are:

1. To interest the pupils in studying the heavens for themselves.
2. To show where the planets may be looked for and how they may be recognised.
3. To help the pupils to apply their theoretical knowledge of the planets to explain the movements they can observe with the naked eye.
4. To exercise the reasoning powers.

Her main fear in regard to astronomy was that we degrade it into light and heat, while she wished children to maintain a sense of wonder in regard to the pageant of the planets, stars, and comets.

I would say that, in general, it is very obvious that because Miss Mason worked with children, her emphasis was overwhelmingly poetic.

At the end of his introductory section on the Quadrivium, Jain says that we need to balance four things in regard to the teaching of these arts: wonder, work, wisdom, and worship. Though Miss Mason doesn’t say a lot about these things in particular, when I look at what she was doing, I think she managed to maintain this balance quite well. While I say that her emphasis was poetic, I do not mean, for example, that there was no work involved. This exam question shows that work was expected:

How would you find the Pole Star? Mention six other stars and say in what constellations they occur.

I’ve asked Mr. Jain to talk more about these four W’s in a future post, so stay tuned. 🙂