Integrating The Lost Tools of Writing with AmblesideOnline: A New {Irregular} Series!

[dropcap]I[/dropcap] asked you about this on Facebook, and I was delighted to find out how many of you were interested in the subject of integrating The Lost Tools of Writing with AmblesideOnline — in fact, I have it on good authority that this is a Thing. People do these curricula together, I mean. This is significant because it means I’m not the only person interested in the subject. I try not to over-indulge my own self when writing this blog, you know. 😉 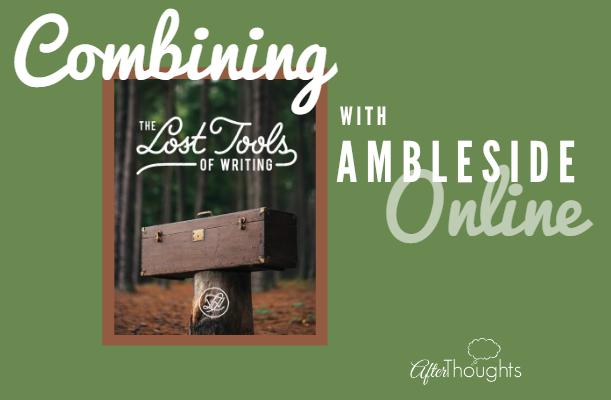 Today, I’m going to tell you what we’ve done so far {hint: not much}, and then I’ll continue to update this post with links in an index at the bottom as time goes on.

So far, we’ve done two things: the intro activity, and learning about the ANI Chart.

You can actually watch the intro lesson for free on CiRCE’s website. In it, Andrew Kern asks us to write down what we find difficult about writing. My student and I watched the video together, and we paused it, and actually wrote a list of things about our writing that was hard or that we wanted to fix. I kept these lists so that we could refer to them in the future.

My student was surprised to find that the issues he listed as troubles all did not fall into the Invention category. When I asked my student why he thought that was, he paused, and then said, “Because I am always narrating?”

That’s right! Because a Charlotte Mason student is always asked to imitate the writing of others, they have never run up against a real invention problem. I have continually told my student that all good writing is imitation {or Afterthinking ahem}, and he definitely saw that narrating had kept him from having an issue in at least one area, which was nice.

We spent one day on this activity.

I have my student watching the videos with me, even though they are technically for the teacher. I don’t really see a reason not to do this. I mean, I guess I could watch the video, learn the thing, and then go tell him the thing. And that’d be fine, too. And if I was teaching in a classroom, that is what I’d do. But really, it cuts out the middle man for me to just have him watch the video with me. So that is what we’re doing. We watched the video, and learned how to do an ANI chart. In this video, Leah Lutz {who is doing the instructing} says that The Lost Tools of Writing was designed to be integrated with whatever curriculum you’re using.

Music to my ears, people! That means that it is way, way easy for us to do this.

Lutz also says that the ANI Chart is something that our students will return to over and over again — they will always be using them. This helped me understand that we want our students to be really good at them — for the chart to come naturally to them.

What I decided at that point was that we were going to do one ANI Chart per day every school day for two weeks. We’re in the middle of that period right now. For now, I am the one asking the question. The first time, I also rephrased the question into the issue. After that, he had to do the rephrasing. Next week, I’m going to have him try his hand at asking the question as well. After creating 8 to 10 of these charts, I think we’ll be ready to move on and learn the next thing. And after we’ll do that, I’ll let you know what happens.

I am allowing the ANI Chart to be his narration for one reading per day. {He is still required to do his regular daily written narration during this time as well.}

I created a simple, blank ANI Chart for myself on my computer. I’d share with you, except that I worry it’d be a copyright violation. But anyhow, this allows me to write out a question when I’m prereading and have it all ready for him — one for each day. The first one was difficult, but of course. That is why we’re practicing it for a couple weeks before moving on.