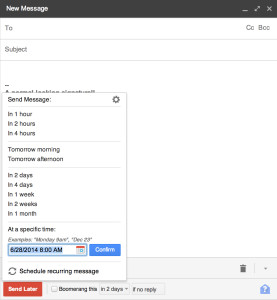 Have you ever heard of the Boomerang plug in for Gmail? I just installed it, and so far, I’m loving it. I have a love/hate relationship with email. One problem I have is that I think of writing emails for certain things at the “wrong” time. For example, I might think of an email that I know I will need to send — and all the content I need to send in it — three weeks before it ought to be sent. {This is usually in regard to my local CM group.} I have tried writing the email and keeping it in draft, but one of two bad things happens: either I forget to send it entirely, or I think I sent it because I wrote it. Either way, it’s dangerous. But if I wait to write it, I end up doing it late. Boomerang allows me to write the email now, and schedule it to send later. It also allows me to mark an email for Boomerang — meaning it’ll come back into my inbox on the day I schedule it to, automatically. So, for example, if I make plans with someone, and I receive an email about it, I can schedule that email to appear back in my inbox the day of, or the day before, as a bit of a reminder to myself.

It is pretty awesome so far!

Here is another new book, this time from Karen Glass. Mind to Mind is {gasp!} an abridgment of Charlotte Mason’s sixth volume. I know that many of you are like me and like to read the whole thing, in the original language, obscure historical references and all. But that isn’t for everyone, and Karen has done a wonderful job. I like what the synopsis says:

Karen Glass, with deep respect for the original, has preserved the essentials in Ms. Mason’s own words, while delivering the material in a format that speaks to today’s readers. This book is an abridgment in the literal Latin sense of “to shorten.” What has been shortened is not merely the length of the original volume, but the path between the modern reader and the mind of Charlotte Mason.

There have been so many times when I wanted to hand the sixth volume to a young mom, but I feel like it’s totally overwhelming. I think this book gives me that option — it’s the original, but with the path shortened. 🙂 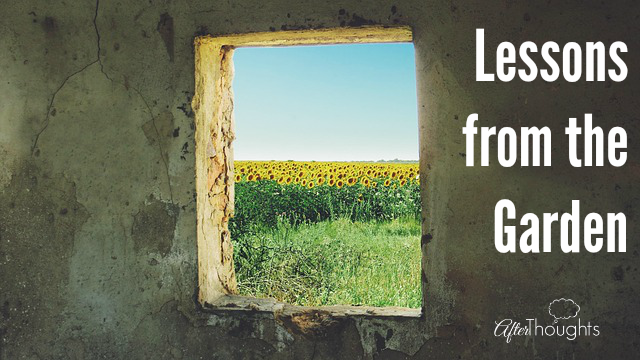 Apparently, we were harvesting sunflowers. That seems so long ago that it’s a bit strange…

I added a few things to the Mommy Toolbox this week. The first was some dice. Whenever we’re doing group narration, I use dice to settle the question of who will narrate. Also, I finally added those Post-It Notes. I’m mainly using these to note additions to my shopping lists. Also making it in the Toolbox were a white-out tape dispenser and my favorite large white eraser.

This week, I finally finished writing the last of my three talks for the Northwest Charlotte Mason Educator’s Conference! So exciting, plus now I can start practicing. I have to be careful, though. I’ve learned that I can only practice a few times before I give a talk. Any more, and it goes badly. Strange, but true. Anyhow, my three talks are:

I had to apologize to the organizers for the fact that I love long, extravagant names for talks.

Arithmetic as a Liberal Art

Integrating The Lost Tools of Writing with AmblesideOnline: A New {Irregular} Series!