Dance of the Musical Universe

[dropcap]T[/dropcap]he subsection of The Liberal Arts Tradition focuses on music — not music in the sense of poetic education, but music as a liberal art, and possibly the “chief art of the Quadrivium” — surprised me greatly! While I was already familiar with concepts such as the music of the spheres, this section not only elevated music to greater heights, but tied all of the Quadrivium more tightly together. 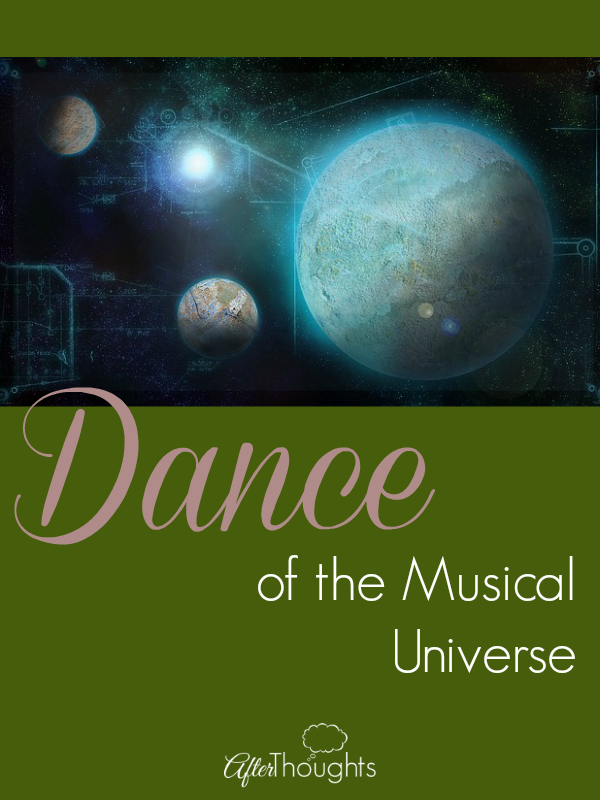 Ravi Jain tells us that the liberal art of music has three divisions: musica instrumentalis, musica humana, and musica mundana. We’re going to briefly look at all three, and how they are {or are not} expressed in a Charlotte Mason education. {Please note that I’m not saying that Miss Mason was deliberately expressing the latter two — she never mentions them in her volumes, as far as I know.

This is what most of us think of when we think of music. It’s skill at playing an instrument — or use of the human voice. It’s learning to read musical notation, coming to understand harmony, rhythm, timbre, pitch, and more. When we think of being a musician, we mean mastery of these sorts of things, right?

This next type of music, then, is dealing with music that we cannot hear, but which is still significant. To understand this kind of music is to understand the mathematical proportions that exist in human society.

The best example of this, in my opinion {or perhaps it is simply the most accessible} is something I mentioned briefly in one of my talks at the Northwest Charlotte Mason Educators Conference — the ancient idea that a person cannot understand justice until he understands harmony — that a society that functions harmoniously is best understood by first experiencing the beauty in the harmony of sound. The harmony of sound trains the soul — tutors the soul in justice.

I have heard arguments for making harmony a priority in the congregational singing of the Church, based upon this idea that heard harmony is actually symbolic of a deeper harmony, the one expressed in Scripture passages like Romans 12:5-6:

So we, being many, are one body in Christ, and every one members one of another. Having then gifts differing according to the grace that is given to us…

I think there is also a musical side to when we talk about education as the ordering of the affections. The idea is that we are born with affections that are disordered — in a word, they are disharmonious. Putting them in order is the great task of education, and when they are in order, they exist in just proportion to one another. Musically, this is harmony within the soul — with harmony here somehow connected to the soul being at rest.

Are there actual equations for this sort of harmony? It seems that, theoretically, there could be, if only we were wise enough to know them:

[A]ll of reality is laden with mathematically proportional relationships.

This does not mean “mundane music.” {Ha.} Rather, this is the music of the world — the created universe — the dance of the planets, the music of the spheres. Mr. Jain offers a fantastic example of this in Johannes Kepler {after whom I named my blog — well, sort of}:

[Kepler’s] fascinating book called Harmonies of the World included dozens of staves of music to describe the mathematical relationships among the planets.

It is here that the doctrine of harmony again transcends mere heard harmony and captures all of creation in its dance, with every bit of creation existing in proportion to one another.

I think that here, too, there is this marriage of music and theology. We know that all of creation is held together invisibly — that little minute differences would result in the complete destruction of our world, and yet everything remains as it is, and the moon doesn’t go flying off its course, and the earth remains in perfect relationship with the sun in order for life to thrive. Of Jesus, we are told:

And he is before all things, and in him all things hold together.

This is music found deep in the created order, the internal logic of the world, with everything hung and held in perfect, harmonious balance.

Charlotte Mason, Musica Instrumentalis, and Beyond!

While Miss Mason did not expect her schools to produce performance-quality musicians, she did incorporate musical instruction into her schools. This included:

The question is: did Miss Mason go any further than this first level of music?

I would say that the answer is both yes and no. On the one hand, no — not literally. I don’t even know how much she was aware of the deeper aspects of music. And there is an extent to which these things are more for scholars, while Miss Mason was concerning herself with children.

On the other hand, I think she did prepare her students for all three levels of music. Miss Mason had a well-developed understanding of human nature — of what it means to be human — and her entire fourth volume was written as a tool for communicating that wisdom to students. Titled Ourselves, Miss Mason’s fourth volume is an allegorical masterpiece that discusses the many forms disharmony in the soul might take. When coupled with a strong civics education, with years and years of Plutarch reading going on in the classroom, I think the preliminary makings of musicana humana are all there.

While I do not think that a Charlotte Mason education specifically teaches much of the third type of music — musica mundana — Jain does suggest that “students trace this story,” meaning the history behind the discoveries of Newton, Kepler and others. This, Miss Mason did well, I think, and it is in the history of science that our student may first hear the rumor of a musical logic ungirding the Quadrivium.

The last portion of this chapter focuses not on music, but the Quadrivium as a whole. It is wonder-ful, and I highly recommend reading and thinking about it. I loved the parting thought that we mustn’t separate the Quadrivium from the Trivium — that we do not have a right to favor one or the other. And this is why:

These arts, united with those of the Trivium, will … lead the way to both comprehension in the philosophies and the human formation of our students.

Pre-reading: How to Move Beyond Winging It