[dropcap]I[/dropcap] was  a tiny bit nervous about continuing this series through the latter portions of The Liberal Arts Tradition. There is a sense in which, while we are traveling up the tree, we are also traveling through an age range. And so, while piety, for example, is always necessary, it’s best to lay that foundation as early as possible. Likewise, the Trivium and Quadrivium come, at least formally, in the older years. I guess I was thinking that philosophy was for adults. 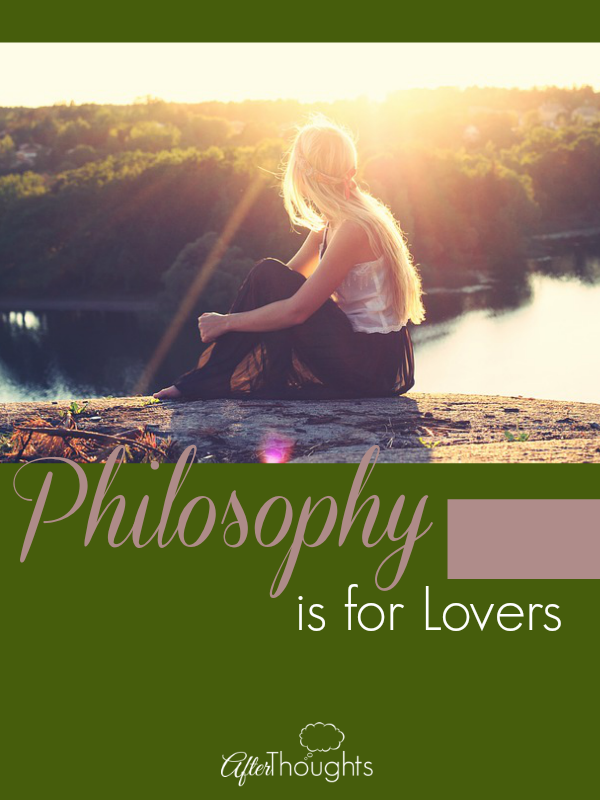 Part of me wishes I had read this section before I spoke at the conference last month. It dovetailed so nicely with my What’s Love Got to Do with It? talk that I could have quoted it liberally (and likely saved myself some time spent researching). And I was taken aback — how in the world did I miss that most important clue, lying in plain sight in the word philosophy itself?

This is my heart, you know — the idea that in order to truly know we must come to care. It’s been the driving thought for me this year. Naturally, then, this quote jumped right off the page at me:

[B]y joining philia (love) with sophia (wisdom) the ancients held together what we moderns often separate, namely, the seemingly subjective quality of love with the often objectified idea of truth.

It turns out philosophy is the ultimate marriage of knowing and caring, and I totally missed that before!

[T]he ancients understood that it is not enough merely to possess wisdom — as if one could in fact possess knowledge purely objectively or dispassionately — one must actually love it and pursue it from the soul.

And, of course, Charlotte Mason is right there in agreement, for she considered the level of care to be the ultimate test of an education’s success:

The Divisions of Philosophy

I had worried about whether Charlotte Mason would have anything to say to us in regard to this chapter, but my fears were completely unfounded. It turns out, she was totally tracking.

The Liberal Arts Tradition explains that philosophy is divided thus:

Turns out, these are Charlotte Mason’s three sorts of knowledge proper to a child:

Either way, I was really excited to, once again, witness the philosophy of The Liberal Arts Tradition come together so nicely with Charlotte Mason. It is so refreshing to me to see a new education book reviving the ideal of love as a necessary companion of knowlege. I have read so many newish pedagogy and educational philosophy books, and while they may emphasize the importance of children “enjoying” themselves, they always miss the central importance of caring — of loving — when it comes to learning. I love that The Liberal Arts Tradition is paving the way for a revival of this old ideal!

Picture Study on a Friday Night