Picture Study on a Friday Night

[dropcap]F[/dropcap]riday was busier than I expected, and one thing led to another, and somehow picture study fell through the cracks. It wasn’t like I consciously cut it from the roster — it was just overlooked and eventually forgotten. 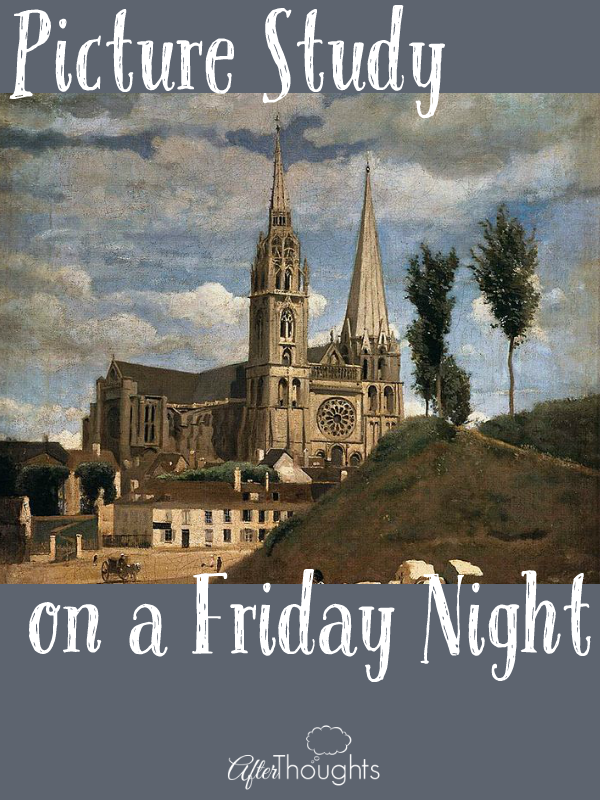 It is tempting to think that, since the school day — and, on Friday, also the school week — is over, that this means we missed out on whatever it is that didn’t get done. Oh well. We will have to add it back in somewhere else to make up for it.

This Friday was different from usual, though. My husband was going to a hockey game with a friend and wasn’t coming home until late. The children and I were grabbing a pizza {two actually, since our resident Gluten Free Girl gets her own special version} and doing a little reading aloud {our current selection is Captains Courageous}.

My eventual goal was to enjoy a brainless evening.

The children were outside playing, and I noticed my little stack of picture cards, all ready for them. I wondered how I had forgotten, but there they were, unused. It dawned on me that the children were still awake, and I was not yet completely useless, and so perhaps there was hope after all.

As dinner was wrapping up, I handed out the cards.

“What are these?” asked O-Age-Seven.

Surprisingly, no one objected to spending a little time with Corot. They are still pretty excited about each getting their own card, which they are allowed to keep if they like. That is new for us this year, and only the teenager seems unimpressed.

And so we did it. We spent about fifteen minutes total. They studied their cards, then closed their eyes to see if they could recreate the picture in their minds. They opened their eyes to compare, and then studied whatever part of the picture that was still fuzzy in their minds. Halfway through, A-Age-10 gave her best picture study narration ever.

Overall, it felt like it actually went better doing it spontaneously and informally when compared to how it usually goes when it is on the schedule. No one was in a hurry, and everyone seemed to enjoy themselves.

While I don’t want school spilling into all parts of the day, this managed to not feel like school at all. Dare I say it was fun?

Sometimes, it pays to get a little creative with how we use our time.