[dropcap]T[/dropcap]he Liberal Arts Tradition gets a double thumbs up from me. But you already knew that, didn’t you? I’ve written extensively about it, and yet there are so many great parts I didn’t cover. But I suppose that is the point. Ultimately, we all have to read these books for ourselves.

It’s been a pleasure to get to know Kevin Clark, Ravi Jain, and Adam Lockridge a tiny bit along the way. Adam’s guest post How the Arts Were Liberated is still my favorite from the series, and if you haven’t read it, go do so! It provides the historical context for the book and, quite seriously, unsentimental me teared up a bit. I find it incredibly moving to read how God is working in the world through Christian education.

The obvious question is what could possibly remain to be said. 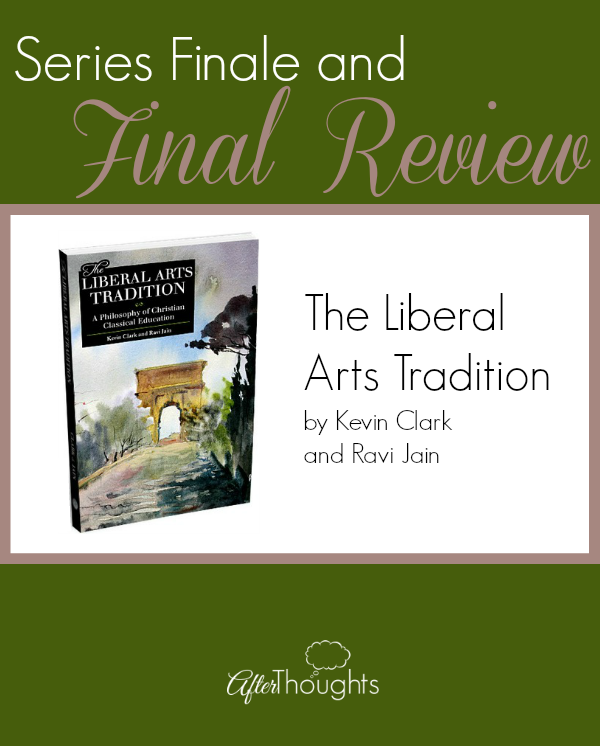 If you recall, the name of this series is The Liberal Arts Tradition: Classical Charlotte Mason. I called it this because I started having Charlotte Mason sightings in the first few pages of the book, and, after flipping through it, I realized that was going to be the case throughout. So I thought it’d be fun to try and tie the two together — and also point out places where they are different, or where they diverge.

What fascinated me was learning that Kevin Clark and Ravi Jain had never read Charlotte Mason before writing their book {though they’ve both told me they’re reading her now, or planning to}. I found myself wondering how it was possible that their philosophy was so similar to hers. It honestly felt to me like CM, repackaged for our own era. Was it exactly the same? No. But the similarities were so striking.

I was thinking about this as I was flipping back through Karen Glass’ amazing book Consider This: Charlotte Mason and the Classical Tradition. In her book, Karen is constantly tracing Charlotte Mason back to her classical roots — books Miss Mason quoted, books she likely read, books that maybe she did or didn’t read, but that influenced books she definitely read, that sort of thing. One of the things that I love about Karen is that she’s got a firm grasp of the big picture. As I was rereading certain passages, I realized something: Charlotte Mason’s philosophy is the logical conclusion of someone steeped in the classical tradition.

That’s why the two are so similar, you see. Clark and Jain, too, are steeped in the classical tradition {as evidenced by their amazing footnotes — a feast in and of themselves}.

At this point, it seems like we should all hold hands and sing.

There is still one more post in this series, and it’s coming up in January. Afterthoughts, if you aren’t aware, takes a Christmas break for two weeks each year. We’ll be “closed” from December 19th through 31st. And we’ll kick off the New Year with my 10th Blogoversary Extravaganza Thingie — a celebration of 10 years of Afterthinking that’ll give away 10 prizes to 10 lucky readers — including one prize that will help one winner be steeped in the classical tradition this coming year.

And also, we’ll have one last post for this series. I’m calling it the denoument. What would it look like for a classical co-op to make significant, meaningful changes in light of what they found in the pages of books like For the Children’s Sake and The Liberal Arts Tradition? Written by Pam Barnhill, we’re going to get the real life story of a co-op that did just that. Can’t wait for you to read it!