Circle Time Review and Plans, Plus: Changes I’ve Made

[dropcap]I[/dropcap]t’s about time I got this together. We’re back at school on Monday, after all. I don’t typically publish posts on the weekends, but I do typically publish Circle Time plans when they’re finished, regardless of the timing.

As I look back on our first term, I would say that our Circle Time habits were weak, which is unfortunate because usually the first term is our best. I like to start off strong! But we weren’t as consistent as usual, and it shows. I didn’t choose as much new memory work for this term because we didn’t make it through what I’d planned for the first. It took almost the whole term for us to find our rhythm. If you recall, this is my first year with all four students doing lessons {I don’t really count kindergarten}, and there were a lot of moving parts and I found myself often cutting bits and pieces off of Circle Time in order to fit everything in.

The funny thing is that once we reached some semblance of homeostasis, the time allotted for everything was fine. It was the period where we were trying to figure everything out that was stressful and things took “too long.” Once we came to a point where decisions didn’t need to be made — where more of the day could run on autopilot — we were able to fit in a full-length Circle Time with all of its parts.

One thing I’m realizing more and more is that there is nothing like having literate children. When they can read their assignments on their own, this frees up so much time! My youngest child isn’t nearly literate enough to read his own school books, but just the fact that he’s headed that direction is exciting to me. I have been reading so much aloud for so many years, and while it’s been enjoyable, for the most part, the more students I added, the harder that was to pull off.

Anyhow, enough of my rambling. Here are my plans for this coming term: 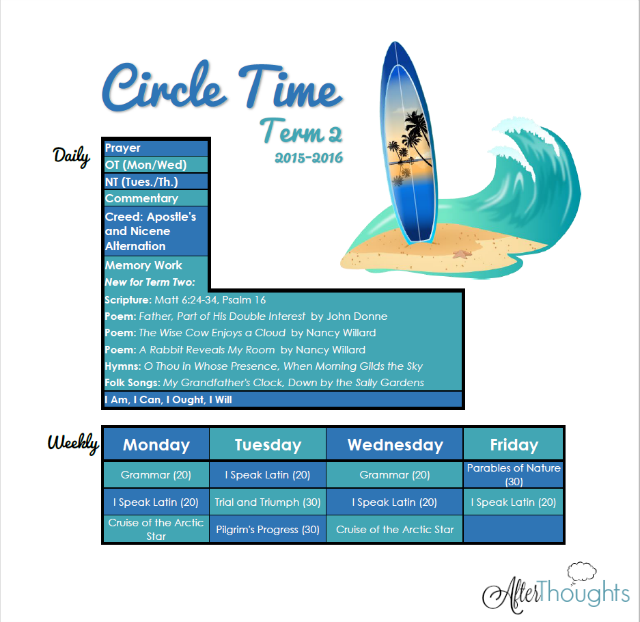 I spent first term focused a lot on my oldest. He’s a teen now, and I wanted to make sure we were doing right by him. When I was prepping for second term, I decided I needed to think some more about my younger children, now that activities for my oldest {tennis classes, online classes, youth group, etc.} are established. While I’d love to put them all in sports, that costs money we don’t have. Thankfully, a huge answer to prayer has come along. For a long time, I’d resisted going to a weekly park day that some friends were having — mainly because I find midweek activities hard to push through — it’s like my brain hits the weekend at that point {even if it’s Tuesday!}, and it’s hard for me to refocus. I’ve decided I need to man up {women can do that, right??} because the hour or so of PE would do them good, as would the time with friends. We’ve gone twice, and it has been such a blessing in so many ways.

All I need to do now is gather the self-discipline to pull myself together on Friday mornings. I’ve decided I’m going to challenge the children to do as much as they can on Thursdays before we leave so that Fridays can still be a lighter day, but I’ll need to do definite teaching. Where does this put Friday jollification? I’m not sure. I’m going to try to keep it to Friday, but I might have to start putting some things back into the weekdays. We’ll see how it goes.

If there is one thing about homeschooling — and parenting in general — it’s that it’s a constant state of flux. The children are always growing and changing, and so the schedule has to do that, too. Honestly, I think it’s more traumatic for Mom than anyone else. 😉

Are you posting Circle Time plans? Feel free to share a link to them in the comments. 🙂

Seven Quick Takes on Reading a Book, Getting Chores Done, Cleaning my Camera Lens, and MORE!

2015: The Best of Afterthoughts