A Review of Classical Academic Press’ French for Children {Plus a Giveaway!}

[dropcap]M[/dropcap]oozle, my ten year old, has been learning French informally for a few years, mostly by listening to French folksongs and copying French phrases into her notebook. This has worked quite well up until recently. Her pronunciation sounds natural, and she speaks the French she knows with confidence, but I knew that it was time she started a more formal programme. This was easier said than done.

We’ve had a chequered history in the foreign language department in our home, but it wasn’t through lack of resources. I don’t like to think about how much money has gone into buying curricula that sounded so promising but in reality just didn’t work for us. Some of these purchases were not thorough enough, others were better suited to adults or older independent students, and some were just plain old boring. 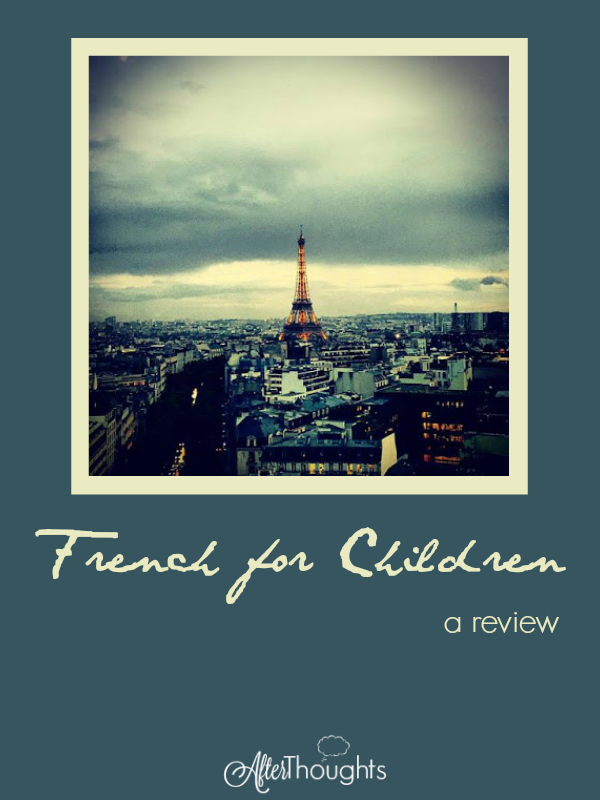 I was reluctant to make any more expenditures after being disappointed with what I’d already purchased, but then I saw that Classical Academic Press (CAP) was about to publish French for Children. I’d been receiving their monthly eNewsletter, Insights, for about a year and liked what I’d read:

Our motto “Classical Subjects Creatively Taught,” describes the essence of all that we publish. We seek to produce classical curricula and media with a clear design and structure, incremental and systematic instruction, all with a touch of delight, creativity, and flair.

This is what I was after for my daughter … structure, but with delight, creativity & flair.

Classical Academic Press kindly gave me a free copy of this curriculum for review purposes, and here are my considered thoughts after putting it to use in our home school.

French for Children, Primer A is the first text in a three year series for elementary students. It is recommended for grade 4 and up and has a similar structure to CAP’s Latin series for children. There are 17 Chapters and a choice of weekly schedules to allow the course to be completed in either half a year or a full academic year of thirty weeks.

French for Children takes a creative immersion-type approach which uses dialogue, translation, chants, vocabulary, dictation, grammar, and quizzes. It is well laid out, uncluttered, and the text is easy on the eyes.

What the French for Children programme includes: 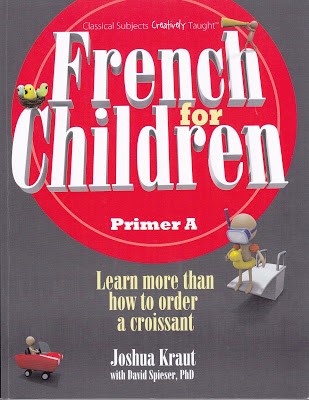 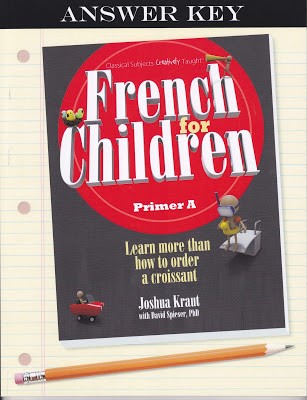 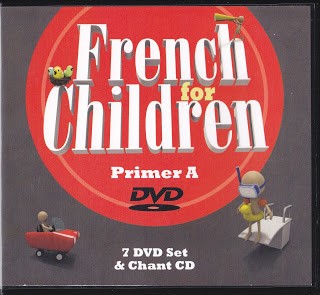 This will vary a little depending on whether you are covering the material over a half or full academic year. I recommend watching the first DVD to get an overview of the course before you start. It takes you through the structure of the lessons and explains the various components.

A 15 page section called the ‘Pronunciation Wizard’ is located at the beginning of the Student Text and as the student progresses through the course they are instructed to refer back to various sections to read explanations and listen to the relevant audio track.

This is how I’ve structured the chapters:

Listen to the Dialogue – A story is woven together throughout the course & Moozle follows along while listening to the audio. This is partly in French, partly in English and introduces new vocabulary. She gets an idea of what the new words mean from the context and tells me what she thinks is happening. The dialogue translation is in the back of the Student Text.

Chant – phrases & sets of words to help with pronunciation. ‘Je parle, tu parles, il/elle parle.‘ These are on the CD and Moozle repeats them aloud after listening.

Vocabulary – new words (about ten per chapter). These are meant to be memorized & students may make their own flashcards for this purpose. I’ve been getting Moozle to write them down in her French notebook.

Video – these are about 45min to an hour long each, so there is a lot of information. Sometimes I divide them over two days or go over parts if I think it necessary. The DVD’s are very helpful for a parent who doesn’t have a knowledge of French, or needs to brush up on what they did years ago, and are an integral part of the course.

Grammar – this course emphasizes grammar but also gives grammatical instruction in an incremental way so it’s suitable for a child who may not have done much grammar previously, but is ready for the concepts e.g. at a grade 4 level.

La dictée – dictation! In France, and several other countries (Switzerland, Belgium, Poland, and Canada, for example), the dictations are structured contests, similar to spelling bees. This is something I hadn’t attempted with Moozle because my French pronunciation wasn’t to be trusted, but the dictation selections are on the CD and I just have to press a button. It’s the same as standard dictation except, of course, the sentences are in French: ‘Elle travaille beaucoup.‘

I think this is a very thorough curriculum; well-structured and methodical, while at the same time including enough variety to keep it engaging and interesting.

Personally, I think it is in keeping with the Charlotte Mason approach if it is used, as CAP recommends, for grade 4 and up, as this is generally when the study of grammar is introduced in a CM education.

The grammar content in Primer A starts with subjects and verbs and continues to add in other concepts such as infinitives, verb conjugation, tense and noun gender.

After a few years of getting ears and tongue accustomed to French words mostly through the medium of folksongs, French for Children is an ideal next step for us.

I think it would also be a good starting point for a student who hasn’t had any prior experience with the French language because of its multifaceted approach.

The only thing I’d add is listening to French folksongs on a regular basis. We are continuing to do this and I’ve included a playlist of some that we have used below.

Classical Academic Press has a very generous 64 page pdf of the French for Children: Primer A Student Text that you may download and try out. There is also a free audio MP3 sample here and the video below is the first chapter of the course (about 45 mins long):

Your chance to win!

Classical Academic Press are giving away two French for Children: Primer A bundles for USA residents! Just use the Rafflecopter form below — opportunity ends midnight on 1/31/2016.

a Rafflecopter giveaway
A 20% discount off of all CAP French products with the discount code FFC2016 is also available through to January 31st for anyone to use. It is also valid on the already discounted French for Children full-program (the bundle). If a person in the USA orders from CAP with the 20% off and then wins the giveaway, they will be refunded.

As usual, the winner must response to the notification email by the given deadline or another winner will be chosen as a replacement.

A playlist of a variety of French songs and folksongs that we’ve used at different times:

Carol & her family live in Sydney, Australia and started homeschooling in the mid 1990’s. Five of their seven children have graduated, two of those are married, and the youngest two are still being educated at home. Carol started blogging about home education and books at Journey and Destination about 4 years ago after receiving a number of requests for information on home education in the high school years & pathways for home schooled students wishing to pursue higher education.