If it Ain’t Broke, Don’t Fix It

[dropcap]O[/dropcap]ut there in the homeschooling world, there are a lot of options. This wasn’t always the case, and there is a sense in which our forebears had it both easier and harder. On the one hand, moms didn’t always have resources they needed. On the other hand, they didn’t have the pressure of trying to find the perfect whatever-it-is — because everyone knew such a thing didn’t exist.

Options are both a curse as well as a blessing. I’m thrilled about what is available today. I can’t believe how much more is out there than when we first started. I mean, blogs were still a new thing. Online tutorials were virtually non-existent. Right now, we’re using both blogs and tutorials to make our homeschool better than it would be if it was just me, the teacher, existing in a vacuum with a library card.

Let me introduce you to a cheesy phrase that needs to be your best friend: 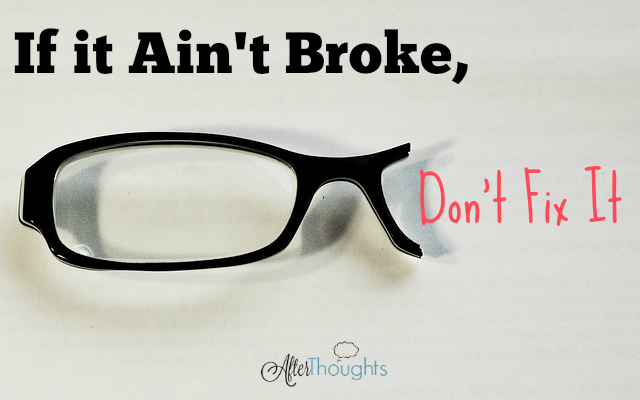 This phrase will be your ally every time you read a blog post, look at Pinterest, talk to your friends, or go to a conference (especially a conference with a Vendor Hall).

Yes, it is fine to evaluate and reevaluate what we are doing and why. Yes, it is fine to make changes. But let’s be sure we’re not making changes just because. That is a waste — time, energy, money, you name it! All down the drain.

Let’s give some examples.

Sally has a grammar curriculum that she has used for years. It looks really boring. There are no bells and whistles. It is neither new nor shiny. Its website looks as if it wants to party like it’s 1992.

Sally’s grammar curriculum works just fine. She already owns it, she’s got a good habit of using it, and her children — get this — are, in fact, progressing in their knowledge of grammar in under 15 minutes per day.

Sally hears about a brand new, fancy, impressive grammar program at a conference or from a friend or on a blog or or or. Sally is very tempted. What should Sally do? Sally needs to ask herself a key question.

Or take Jenny. Jenny’s using the same math program with her younger children that she used with her older child. But on a podcast she listened to, she heard that math should be spiral — or not spiral — or wonder-based — or memory-based — or or or.

Now Jenny is confused. Her math program is not what this podcast said it ought to be.

What should Jenny do? Jenny needs to ask herself a key question.

Or take Heidi. Heidi is trying to add a foreign language. She bought a curriculum last summer, and it’s going okay so far this year. But then she heard a Latin teacher say that languages ought to be taught using method x and she’s pretty sure her curriculum is using method y.

What should Heidi do? Heidi needs to ask herself a key question.

Lots of times, the answer is just no. No, this is not broken. It’s not what “everyone” says it should be, maybe, but it’s working fine for your family.

Other times, but far less frequently, the answer is yes. Yes this is broken.

What do you do now?

When It’s NOT Broken

Don’t let people convince you otherwise. The learning curve involved in adopting a new curriculum is huge. If you have a curriculum that is working for you, use it. Use it faithfully. Be consistent. Let it be your friend, ally, and tool. And then let all the shiny new stuff go. It doesn’t matter. You don’t need it.

It is usually pretty obvious when things are broken, because it’s not going well. Children aren’t learning — they are frustrated. They don’t get it. Or you can’t seem to be consistent at it (this one is tricky because sometimes the problem is US, but other times we can’t be consistent because it’s not working — you will have to pray for discernment on that one).

We had a situation a couple years ago where I changed math curricula. I had used Math Mammoth with my oldest. It was great — he used it for all of his elementary school years. But then when my younger children started the curriculum, it went terribly. At first, I thought my oldest daughter wasn’t ready for math — and that was partly true. But the deeper issue was that she needed a lot more direct instruction than the program offered. It wasn’t until my next daughter was also struggling that I realized the curriculum wasn’t a good fit and moved them both to MEP math.

In this case, moving to a new curriculum was a good idea. It continued working well, and so when it was time to start my youngest on math, I went ahead and started him on MEP as well. He’s a natural at math. Any program probably would have worked for him, but the rest of my children were doing MEP, and so I let if it ain’t broke, don’t fix it be my guide.

Other cases might call for using the same curriculum in a different way. For years, I used KISS grammar. I found that printing KISS worksheets out worked well for my oldest child, but was a total fail with my second child. I looked around and tried other curriculum (this is also called “wasting money and time”), but nothing changed. It was then that I realized the problem was me and that I wasn’t making adjustments for how grammar needed to fit into a homeschooling lifestyle that had more than one student. What had worked when I only had a student or two wasn’t working when I had four different grades to teach.

So, I moved grammar — the same old KISS grammar I had used for years — into Circle Time. We do a few exercises hand-copied onto a white board during Circle Time a couple mornings per week. This works for us better than anything else I have tried, but it’s taken me a while to accept that because I often feel like grammar needs to be this big deal.

My point is that when it’s broken, I think we should feel free to switch curriculum, yes, but we might first check into whether we can use the same curriculum in a different way.

This is the time of year when we start to think that maybe curriculum hopping will solve all our problems.

This is why I like to remind myself of this phrase. If it ain’t broke, don’t fix it. It doesn’t matter if your friends think it isn’t the latest and greatest — if it’s working for you, keep using it. In the long run, being faithful and consistent covers a multitude of homeschooling sins.

How to Help Long-Winded Narrators Be Concise