[dropcap]I[/dropcap] am not a fan of the book, Beautiful Girlhood by M. Hale. The author comes across like a chiding great aunt, who has long forgotten what it’s like to be a girl herself, priggishly declaring that girls don’t have the perspective to know what is good for them. She may be right, but she is a dreadful companion. The book’s saving grace is a chapter called “Making Friends of Books” containing this sage observation: “What is true of personal friendships is also true of book friendships.”

While we who educate our children at home can’t choose our children’s friends, we try as much as possible to associate with families who share our basic values. In the same way, we surround our children with books that reflect who we are, and who we want our children to become. We want those books to teach them what we ourselves know, what we ourselves believe, and perhaps those things we once knew but have since forgotten.

As our children mature, they will inevitably encounter people who don’t believe as we do, and yet they may find enough in their shared humanity to form a basis for a friendship. Think for a moment of our own relationships. As adults, we have a wide variety of associations, and like the late Justice Antonin Scalia and Justice Ruth Bader Ginsburg, it is not impossible to develop close friendships with those who hold fundamentally different positions from us. The same is true of books. 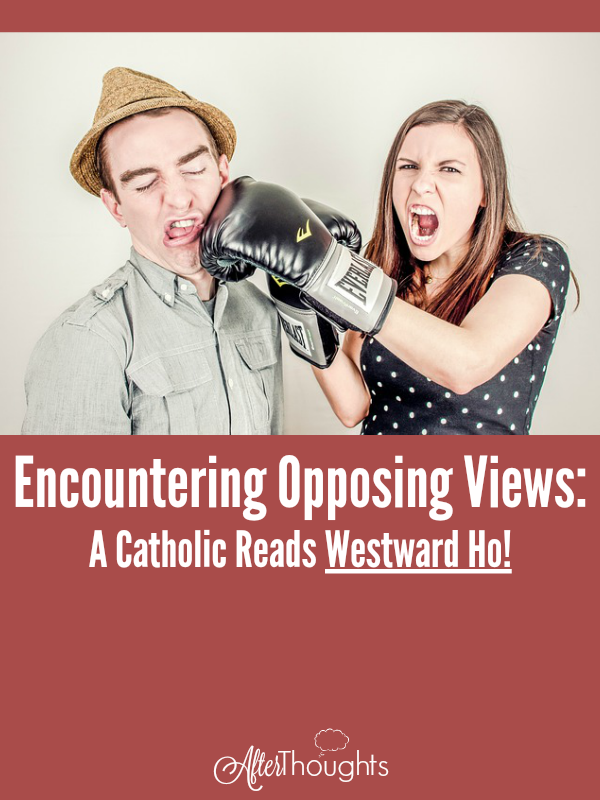 We are a Catholic family. My daughter was 14 when we started Year 8 of AmblesideOnline. As Year 8 covers the Reformation, it wasn’t surprising that the literature selections would include Kingsley’s Westward Ho!, a novel that contains ideas like this:

And now began that great sea-fight which was to determine whether Popery and despotism, or Protestantism and freedom, were the law which God had appointed for the half of Europe, and the whole of future America. (Kingsley, Charles. Westward Ho!, or, the voyages and adventures of Sir Amyas Leigh, Knight, of Burrough, in the county of Devon, in the reign of her most glorious majesty Queen Elizabeth, Kindle Locations 9320-9322).

But in justice be it said, all this came upon Eustace, not because he was a Romanist, but because he was educated by the Jesuits. Had he been saved from them, he might have lived and died as simple and honest a gentleman as his brothers… (Locations 945-947).

Ouch! Why would I give that to my daughter to read?

In 1936 F. Scott Fitzgerald wrote: “The test of a first-rate intelligence is the ability to hold two opposing ideas in mind at the same time and still retain the ability to function.” While confident of my daughter’s intelligence, and open to any change of denomination this book might inspire, I was a little concerned she might feel personally attacked by Kingsley’s apparent bigotry. Now the end of the book justifies the entire work, but as I decided to give it to her before I read the end, my reasoning didn’t account for it. So no spoilers here.

The context of Westward Ho! is the post-Council of Trent Church, the birth of the Jesuit order, the Spanish Inquisition, the Papal Bull “Inter Caetera,” issued by Pope Alexander VI in 1493, which played a central role in the Spanish conquest of the New World and eventually touched off a vicious competition between Spain and England over the new territory, and Foxe’s Book of Martyrs published in 1563, which detailed Queen Mary’s bloody repression of English Protestants.

My daughter’s context is the post-Vatican II Church, which lives and breathes ecumenism (to a point), mercy, care for the poor, respect for diverse cultures, and an abhorrence of war as anti-ethical to the culture of life. For 13 years, my daughter’s primary experience of the Church was within our positive, nurturing parish community.

Difficult ideas are most easily introduced at a distance. My daughter knew about the Reformation through the historical and biographical storytelling of Our Island Story and Trial and Triumph. Westward Ho! was an opportunity to experience raw history, to feel what Catholics in England felt, to understand the complex motives of the new Protestant majority. I wanted my daughter to examine all of the motives critically, in terms of history and in terms of what has always been true of human character.

The author of a living book will create a complex character, not a one-dimensional hero. My daughter found she did not personally identify with the main character, Amyas.

Now this young gentleman, Amyas Leigh … being (on account of the valor, courtesy, and truly noble qualities which he showed forth in his most eventful life) chosen by me as the hero and centre of this story, was not, saving for his good looks, by any means what would be called now-a-days an “interesting” youth, still less a “highly educated” one; for, with the exception of a little Latin, … he knew no books whatsoever, save his Bible, his Prayer-book, the old “Mort d’Arthur” of Caxton’s edition, which lay in the great bay window in the hall, and the translation of “Las Casas’ History of the West Indies,” which lay beside it, lately done into English under the title of “The Cruelties of the Spaniards.” He devoutly believed in fairies, whom he called pixies; and held that they changed babies, and made the mushroom rings on the downs to dance in. (Kindle Locations 151- 158).

Hence she realized that she wasn’t obliged to take the point of view of the protagonist, even though she was to spend 12 weeks with him. She was, however, obliged to hold on to her belief in a good Church while at the same time understanding how evil within the Church motivated the actions of the nations in the late 16th century. It is not unlike how evil wears religious clothing today. This is what I wanted, and she did not find it difficult.

There is a difference between a book containing ideas that contradict your own and a book that argues in their favor. It’s the difference between your Catholic girlfriend who explains the doctrine of the Real Presence, and the one who tells you that your take on the Eucharist is all wrong. The second friend is attacking your faith, while the first is making herself vulnerable to you. My daughter recently read a book that made a cogent argument against free will. Having never before encountered the idea from a safe distance, she was not prepared for it to confront her directly. Horrified, she threw the book away.

We read books and make friends with people despite differences of opinion because good people, like good books, are multifaceted. It’s also important, I think, to understand that wrong ideas can still be powerful. Where my daughter has been well grounded and supported in her own beliefs, and has been introduced to difficult ideas first at arm’s length, she has been able to wrestle with deep challenges more closely as she approaches adulthood.

Kathy Wickward is learning and educating her children in the Pacific Northwest. She blogs at Northwest by North. She has a Masters in Public Administration from the University of Washington and works at her beloved Catholic parish as an administrator when she’s not riding her bike, listening to narrations or reading science literature.