The Primacy of Habit

[dropcap]I[/dropcap]’ve been thinking about habits this week as I was prepping for our local Charlotte Mason group. We’re reading through Home Education {which means there is a Home Education study guide in the works here at Afterthoughts!}, and it’s been such a good thing for me to revisit this topic. There are a few things I’ve let fall through the cracks with my two younger children — I was more intentional when I had fewer students that were school age. In some ways, I’m better overall at habit training because the actual training is a habit that I have. But in other ways, my youngest, especially, is a more difficult person to train, and he and I tend to have the same faults, which means I don’t always know how to help him conquer them {because I haven’t yet conquered them in myself}. 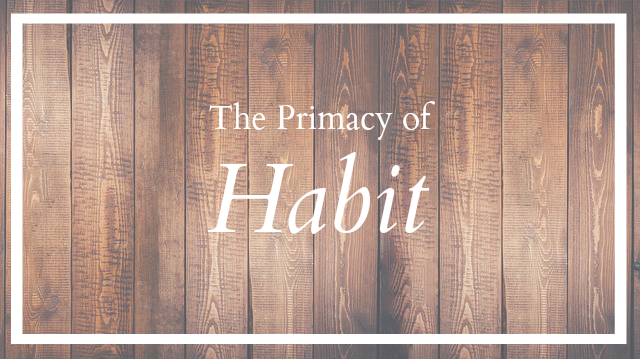 Here is a realization that I had this week: the to-do list can crowd out habit training. Even though we say noble things like “the end of education is virtue” or “education is character formation,” it is so easy to get caught up in checking all the boxes. It is striking to read when Miss Mason says:

This horse-in-a-mill round of geography and French, history and sums, was no more than playing at education; for who remembers the scraps of knowledge he laboured over as a child? and would not the application of a few hours in later life effect more than a year’s drudgery at any one subject in childhood? If education is to secure the step-by-step progress of the individual and the race, it must mean something over and above the daily plodding at small tasks which goes by the name.

Isn’t that what we get caught up in? The “daily plodding at small tasks?”

Do your math. Stop looking around and do your math. Why are you daydreaming? Do. your. math!

They are, she says in a nearby passage, “incapable of steady effort.”

Yes, I believe in Doing The Things. I believe in doing copywork, in reading history, in map work for geography, and so much more.

I was struck by how we often think we do not have time for the habit training in the younger years, when in fact this is exactly what the younger years are all about. By the time we reach junior high, do we still want to be fighting the Pay Attention battle? The Stop Daydreaming battle? The Go Do Your Work battle?

I don’t know about you, but I want to enjoy the upper years, which means I don’t want to have to nag my kids to do what they ought.

And so Miss Mason tells us that habit is the lever that can lift our children out of themselves and make them capable of steady effort.

I recently listened to a Q&A episode of the Mason Jar podcast, and I can’t recommend it enough. Cindy read a letter in which a mom describes how she broke math into 15-minute sessions. It wasn’t phrased exactly this way, but the intent was to help the child practice that steady effort Miss Mason is speaking about.

It’s an interesting question: if a child can only concentrate on something for 15 minutes, why do we ask him to do it for 20? Because it needs to get done? But then we are training him to daydream, which results in more conflict.

Or so it seems.

Each of us have habits. The question isn’t whether we want to have habits or not have habits, but rather what habits are we going to have?

I think when it comes to habit training, one verse really sticks out:

And let us not grow weary of doing good, for in due season we will reap, if we do not give up. {Galatians 6:9}

Isn’t this the real issue? We have so much to do, and a lot of us are really tired, and it’s hard to prioritize things sometimes. But if education is ultimately about character, then how they are while they study matters. If they have bad habits associated with school, it’s only going to get harder. While it feels like the easy path, neglecting habits only makes it harder later on.

Next month, Mystie and I will have a podcast episode about focusing on habits in the summer. Until then, all I can do is echo Scripture: do not grow weary in doing good.

Life Without a Cape: There Are No Supermoms Here