[dropcap]S[/dropcap]wedish Drill is something frequently referenced throughout Charlotte Mason’s works. Soundness of body was a primary goal of incorporating this form of physical education in her schools in keeping with her philosophy dedicated to the development of the whole child. Yet today we know very little about Swedish Drill and what it looked like when implemented. Charlotte Mason homeschoolers often wonder if it is something that should be incorporated into their own home schools or if it is an outdated method of physical activity. With my next several posts I hope to help you see what Swedish drill looks like in implementation and convince you that it is still highly beneficial as an activity to adapt for the education of our children. 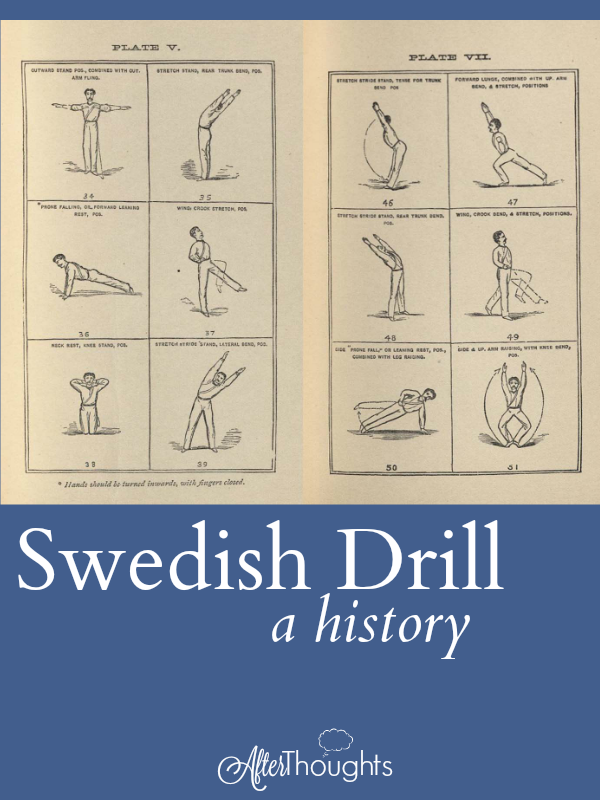 Swedish Drill was a system of Swedish gymnastics invented at the turn of the 19th century by Pehr Henrik Ling, a fencing instructor in southern Sweden. His goal was to promote exercise as a means of restoring public health. Ling’s main work — The Essential Principles of Gymnastics — reads as a testimony of the benefits his exercise theories played out in his own life. In this regard his work reminds me very much of that of Joseph Pilates, but that is a topic for another time. Ling’s work had medical application as well: in the mid 1800s his theories were adapted to reflect the medical value of exercise as a form of rehabilitation from illness. His philosophies and practices were gathered into the Handbook of Medical Gymnastics. Ling is also considered to be the father of Swedish massage.

Prior to 1870 there was no national system of elementary education in Britain. However, the earliest effort to introduce drill into “public” schools was recorded at a meeting in 1860 at the Thatched House Tavern, which is often referenced as the point at which formal Physical Education truly began. The Forster Act (or The Elementary Education Act of 1870), which impacted England and Wales, was passed and this made education compulsory for children ages 5-13. This was an effort to make education and its benefits available to the working classes. It also allowed schools to receive government grants for providing physical training. The act contained a clause mandating participation in “drill” 2 hours a week under a competent instructor. At that point drill was military — not Swedish.

In 1902 “The Model Course” was implemented as a compulsory element in schools as a means of instilling a military spirit in the people of Great Britain as well as creating a farming ground for potential officers in the British Army. Why was this important? The Model Course was being actively developed during the reign of Queen Victoria (1819-1901), under whom Britain engaged in 28 military campaigns — which obviously created a great need for soldiers. This military drill training emphasized physical fitness for military recruits and was implemented specifically to generate a habit of immediate obedience to a given command and to instill discipline.

By 1904 measures had been made to minimize this military influence and in 1909 the transition was made to the implementation of therapeutic gymnastics in the form of Swedish Drill, which maintained the latter purposes of military drill but removed the emphasis on preparation for life in the army. The incorporation of Swedish Drill in British schools was largely under the supervision of Martina Bergman-Osterberg, who trained at the Royal Central Gymnastics Institute in Stockholm and who served as Lady Superintendent of Physical Exercises in Girls’ and Infants’ schools through the London School Board.

Now that we know a bit more of the history behind Swedish Drill let’s look at what Charlotte Mason has to say about it.

I will only add, that to give the child pleasure in light and easy motion — the sort of delight in the management of his own body that a good rider finds in managing his horse — dancing, drill, calisthenics, some sort of judicious physical exercise, should make part of every day’s routine. Swedish Drill is especially valuable, and many of the exercises are quite suitable for the nursery. Certain moral qualities come into play in alert movements, eye-to-eye attention, prompt and intelligent replies; but it often happens that good children fail in these points for want of physical training. (Volume 1, p 132)

For physical training nothing is so good as Ling’s Swedish Drill, and a few of the early exercises are the reach of children under nine. (Volume 1, p 315)

…the teacher makes it his business to see that the body gets its share, and an abundant share, of gymnastics whether by way of games or drill. (Volume 6, p 72)

These quotes illustrate that Charlotte Mason found value in the physical benefits of Swedish Drill. Now I’d like to take a look at what she has to say about Drill’s place in the school day in the PNEU schools.

No book-work or writing, no preparation for report, is done in the Parent’s Review School, except between the hours of 9 and 1130 for the lowest class, to 9 and 1 for the highest, with half an hour’s interval for drill, etc. (Volume 3, p. 240)

I’d like to consider this for a moment. Did you notice that in a school day that was 2.5-4 hours long a full 30 minutes was devoted to drill – ie to physical education?

Just let that sink in for a moment, and let’s break this down further by age and class with the help of Volume 3 and the PNEU timetables.

Class Ia. — The child of six goes into Class Ia; he works for 2.5 hours a day, but half an hour of this time is spent in drill and games. Including drill, he has thirteen ‘subjects’ of study for which about sixteen books are used.  (Volume 3, p. 272)

This represents 20% of the school day for the youngest students, which consisted of children ages 6-9.

In this post we’ve learned the history of Swedish Drill, and emphasized its importance and place in Charlotte Mason’s schools. We’ll take a closer look at what Drill looks like in implementation in my next post. Or would you prefer a lot of the information from the Swedish Drill posts in one easy to read place? My eBook Swedish Drill Revisited is 50+ pages of Swedish Drill information, a complete open-and-go curriculum that will assist you in instructing your children two complete Swedish Drill routines. It’s entirely self-contained and has everything you need to make Swedish Drill happen consistently in your homeschool or co-op. Click here to read more or here to see sample pages or click here to purchase.

Far as the Curse is Found: Suffering and Holiness