Read Along with Me? Vittorino da Feltre and Other Humanist Educators

[dropcap]M[/dropcap]any of you know that I’ve been working with a team of people to design a modern version of Charlotte Mason’s Mothers’ Education Course for AmblesideOnline. I like to call myself the irresponsible person in charge because this project has taken much longer than if, say, an INTJ or ESTJ was in charge.

But, it’s a good project for me, irresponsible or not. I have such a passion for moms to continue their own education — to continue learning and growing and not get burnt out by mothering. This has been one of the purposes of this blog — both to encourage growth in others while simultaneously giving myself habits of growth through reading and writing —  as well as Scholé Sisters in all of its iterations. 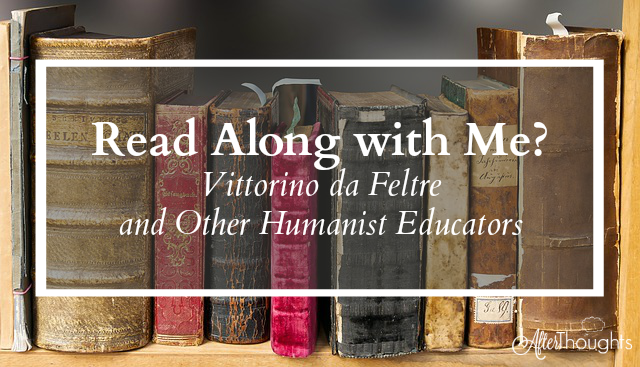 There are so many books assigned in the three-year version of Miss Mason’s course {there was also a two-year version}. Some of them are easier to replace than others — or not replace, as the case may be. It’s pretty simple to replace an old, out-of-print astronomy book with something similar that is up-to-date and available for purchase. Books such as Plato’s Four Socratic Dialogues and Republic, on the other hand, don’t need replacement {though admittedly we might choose a newer translation; what I linked were the translations Miss Mason’s course used} — because nothing can replace Plato, plus C.S. Lewis said it best when he told us it was easier to read Plato than a book about Plato.

Heading up this project has cost me more time and money than I anticipated. You see, I keep buying the books and then reading them. It’s a questionable decision since almost all of the books can be found free online. But I keep thinking that these must be really good books if she used them, and so I buy them. Not all of them, of course, but the ones in the Mental and Moral Science and Education category get me almost every time.

Which brings us to this title: Vittorino de Feltre and Other Humanist Educators: Essays and Versions: An Introduction to the History of Classical Education {free online version is here}. I told myself I wasn’t going to buy this book, but I flipped through the pages online and decided it was worth hunting down and adding to my library.

The first thing that piqued my interest was the discussion I found within on the importance of habit. While we know that was important to Aristotle — and was, of course, important to Charlotte Mason as well — we don’t see much about habit in more modern books written about classical education. Naturally, I want to know more!

My copy hasn’t arrived yet as I had to order it from the UK. It wasn’t expensive, though — less than $7 including the shipping. However, comma, this is an extremely rare book. Copies are few and far between, and rarely in good condition {which is why I jumped at this one}.

I’ve decided I’m going to blog through the book once it arrives {whenever that is}. I feel like there is a definite gap in my grasp of the history of classical education, and interestingly enough this book covers the time period I’m talking about — the Italian educators of the late 1300s and 1400s.

One reason for my interest is because of my love for Charlotte Mason’s Great Recognition, which was inspired by a fresco in the Spanish Chapel in Santa Maria Novella in Florence, Italy. The fresco is The Triumph of St. Thomas Aquinas and it is divine. This fresco was painted in the mid 1300s, which means educational philosophers such as da Feltre were born into the culture that produced this astounding piece of work. I want to know what that was like — I want to understand the philosophical sea they were swimming in.

So would you like to join me? Like I said, it’s hard to find a copy. As I type, there is only a single copy on Amazon! You might try saving a want on AbeBooks to see if that helps. And, of course, there is the free copy online.

It’d be disingenuous to say that I am going to run this like a book club. I’m not. I’ll blog through it, but I can’t put it on a schedule because I don’t want to be rushing to meet deadlines. With that said, I thought that some of you would like to read along so that we can discuss intelligently in the comments.

The LAST of Seven Quick Takes