Everything New is Old Again

“I have attempted, in a vague and personal way, … to state the philosophy in which I have come to believe. I will not call it my philosophy, for I did not make it. God and humanity made it; and it made me.”
–G.K. Chesteron, Orthodoxy

[dropcap]W[/dropcap]e often feel like discoverers. We piece together a philosophy out of the things we read, the things we think and observe, the things we hear, and we call it ours. We call it good. We call it true. And often, we call it new. It can be quite humbling to discover that, while often good and true, we have actually stumbled upon something that is quite old. 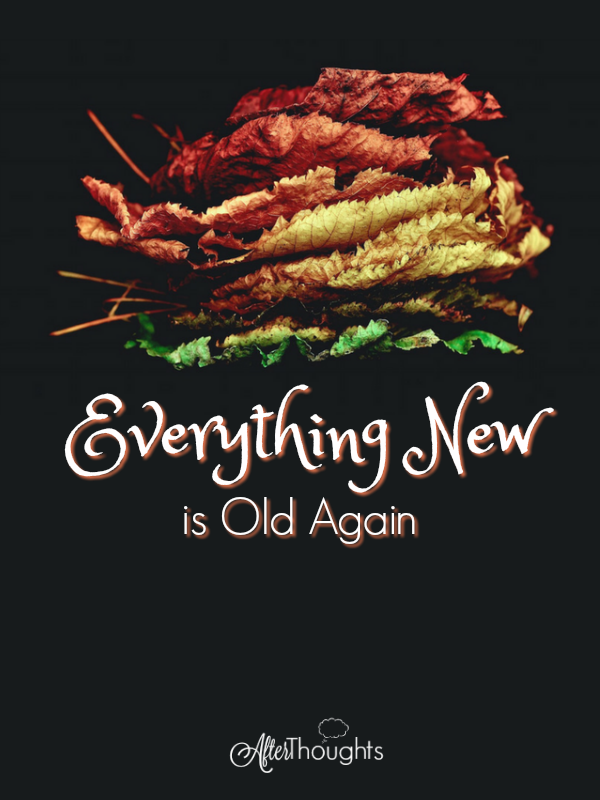 In his book Orthodoxy, Chesterton begins his first chapter by hypothesizing an Englishman on a yacht who miscalculates his course and discovers … England. And then he says something interesting: I am that man.

I am the man who with the utmost daring, discovered what had been discovered before.

Isn’t that what it means to come to things like a child? For children, there may have been a thousand daisies before, but upon first meeting one of them, it is new. “The flowers,” Charlotte Mason says, “are not new, but the children are.”

The introduction to Vittorino da Feltre and Other Humanist Educators is only a couple pages long. I was tempted to skip it, in fact. I’m always in a hurry to get on to the meat of a book. Do read it. It only takes a couple minutes, and it gives us a number of helpful insights.

For example, the book is divided into three parts:

We now know what to expect.

[T]he ideal of the greater Humanists was slowly narrowed and hardened till it reaches the pedantry which rouses the scorn of Montaigne.

In this context, we can also consider Charlotte Mason’s criticism of the Academic grind of her day:

What we may call the ‘Academic’ solution of the problem is, — teach a boy to know one thing thoroughly, say, Greek or Chemistry or Mathematics, and you give him the key to all knowledge. Therefore, we are told, it is not what you know that matters, but how you learn it; and a grammar grind, a mathematics grind or a laboratory ‘stunt,’ with a few odd matters thrown in, is supposed to answer all the purposes of education.

As a result, the children lose all curiosity, she tells us. We are reminded of Dickens’ infamous Professor Gradgrind, whose failures in teaching are legion. David Hicks, interestingly enough, agrees with this assessment of Victorian education:

The popular mind associates the idea of a classical education with the narrow and elitist schools of Victorian England. In fact, these schools perverted classical education by teaching in precept and in example a hereditary aristocratic ideal intended to serve the ambitions of Empire and to preserve the status quo. … To [the average Englishman], classical education meant little more than a symbol of ruling class privilege and a study of Latin, with perhaps a smattering of Greek … By the turn of the century, a growing number of self-proclaimed progressives, desiring to democratize the school and mistaking what went on in Victorian schools with classical education, began to put forward their own theories on education.

It is possible that we often feel like we are discovering something new because the old forms of the thing have been corrupted over time. If that is what it means to be old, we think, then I want nothing to do with it.

I think reading this book is going to feel a lot like a homecoming. We, like Chesterton, will find ourselves Englishmen discovering England. Or, as Charlotte Mason wrote in her brief description of another book:

You read one of the essays, feel that all the thoughts are your own thoughts, and that nothing new is being said…

But she goes on:

You digest the essay, consider it in its bearings on your own children, and, behold, you find you have imbibed a number of new ideas, practical, vital, full of interest and hope.

This is homecoming after being away a very long time. You know the place, and yet how fresh and new it all seems! How welcoming! How much more charming than when you left!

Like children taking delight in daisies, it might not be new to the world, but it is new to us, and that is enough. This is what learning is like.

There are a couple of places early on in Vittorino da Feltre and Other Humanist Educators where the word “new” is used. Woodward refers to da Feltre and his peers as those who

within the space of hardly more than one generation, could establish a concept of education wholly new to the modern world… {p. ix}

In the beginning of the first chapter, we see a similar use of the word. After explaining that da Feltre entered the University of Padua the very same year {1396} that Manual Chrysoloras departed Constantinople and became the first Greek professor in the West, Woodward goes on to state:

[T]here is strong evidence that Padua, the second great Italian university of the time, stood in more friendly relation to the new studies than any other ‘Studio Publico’ of the peninsula except perhaps Pavia. {p. 2}

I had to laugh. These “new” studies had been going on in Constantinople for around a thousand years. There was nothing new about them.

It’s sort of like how, when I bought my 1999 Suburban back in 2006, I called it my “new truck.” {I now call it my “old truck,” in case you are wondering.} It was new to me. And also, it was superior to what I had before. Both of these factors meant I was a bit giddy about it.

How much moreso must have been the excitement of this “new” discovery of old — seemingly lost to the West — ideas!

You know what word Chesterton uses to describe this new-yet-old thrill we feel?

I wish to set forth my faith as particularly answering this double spiritual need: the need for the mixture of the familiar and the unfamiliar which Christendom has rightly named “romance.” For the very word “romance” has in it the mystery and ancient meaning of Rome.

We’re taking our first steps into new and unfamiliar territory — Italy of the 13 and 1400s. It’s a world unlike our own, on so many levels. And it’s amazing.

We’ll recognize the terrain more than we expect. We’ll see the faces of our friends. Charlotte Mason over here. Karen Glass over there. David Hicks in this piece here. And, oh, didn’t that sound like a lecture I heard Dr. Perrin once give at that one point?