[dropcap]I[/dropcap]n my reading of Vittorino de Feltre and Other Humanist Educators, I’m still hovering around pages 25-40 or so. I find there is so much to think about that I keep revisiting the pages; I’ve been allowing myself a slow digestion.

Most of you know that Charlotte Mason says that we have three (and only three) tools of education: atmosphere, discipline, and life. Atmosphere isn’t contrived; it’s the real culture of the home or school room. Discipline is the collection of habits we build in order to foster both good character as well as good learning. Life is the bequeathing of the good ideas upon which the mind will grow. There’s more to it than that, but this concise description will make sure we’re all on the same page. 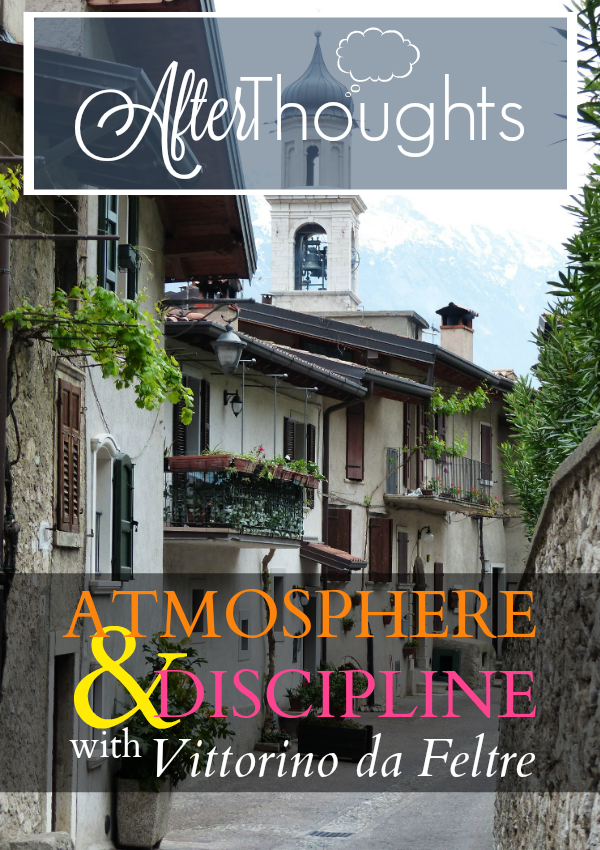 I’m beginning to see Vittorino’s use of two of these three tools, atmosphere and discipline, in this section though he does not call them by those names. (The third tool, “life,” would be the curriculum, which I’m sure we’re encounter in future pages.)

Vittorino’s school was a boarding school. This is interesting because some of the children were only moved blocks away from their families. It wasn’t like his school was out of town for all of them. And yet, whether their families were near or far, they moved to the school building, which was called The Pleasant House.

Apparently, Vittorino approved of the distinction of the house, but stripped it of its luxury. The location sounds amazing and reminded me of Essex Chomondeley’s description of why Charlotte Mason eventually chose Ambleside (in England’s Lake District) as the location for her school.

One of the reasons for the boarding school was because Vittorino needed total control. We are told that

the special discipline of Vittorino would hardly have been possible on any other system. (p. 33)

Vittorino believed in the “equality of genius” (p. 30), and so the princes were on equal footing with the most impoverished charity student. At the outset, Vittorino removed all “temptations to luxury, idleness or arrogance” (p. 33) — the stripping of the trappings of the building was part of this equalization project.

This was a much more democratic atmosphere than I expected for the time and place. Essentially, we have Vittorino requiring that distinctions will be made by merit, or not at all — definitely not by class. And the parents are agreeable to this! I could not help but wonder if this was an unusual atmosphere for its time.

I said that Vittorino had “control” — what does this mean? Is he some sort of tyrant?

What this translated into was a strict watch over the habits of his household. I have always wondered if this is one thing that gives homeschooling a leg up over schools. I am not anti-school.  But if the best education includes the training of habits, how hard it must be to train when you only have the child for a portion of the day. Vittorino understood education is not just curricular but extra-curricular. What I mean is, it doesn’t just take place during school hours via lessons. It’s an all-encompassing thing.

Vittorino had a deep affection for his students. The atmosphere, we might say, was first and foremost one of love. He maintained his position of authority so well that harsh punishments were not needed.

Vittorino placed priority on outdoor life and games and activity — so much so that we are told:

Two little boys were overheard by him talking earnestly apart; hearing that they were discussing their lessons, he exclaimed, ‘That is not a good sign in a young boy,’ and sent them off to join the games.

He paid strict attention to good health. He closely watched their appetites  — both for signs of vice as well as signs of ill health.

This is another thing I have been thinking of: that we today tend to underestimate the connection between mind and body. When a child is struggling so much in lessons, we think about habit training, we get frustrated, we forget it might be sugar or gluten. At times we fail to consider the physical component. When my husband speaks with clients and they complain about children who are difficult to train and do not respond to discipline, that is always his sign to start testing for food allergies or other physical problems.

I look forward to discussing his curricular approach with you, but I thought a brief exploration of his use of the other two tools might be helpful — it is so easy for us to jump into curriculum and practices and skip other important factors that might have more bearing that we give them credit for.

How I Find Time to Read