[dropcap]I[/dropcap]t was my older daughter who first drove me to the Church Fathers. At the ripe age of four, she began interrogating me about essentials of the faith. It felt a bit like torture. Charlotte Mason talks in Home Education about children absorbing essential truths in a somewhat unquestioning manner, but I have been plagued with children who question everything from the existence of God to the nature of the Trinity to the possibility of resurrection, and that when barely out of diapers.

So I started reading, and as I read I realized that so many issues we think of as “modern” have already been dealt with by the Church, usually within the first few hundred years. (As Solomon said, there is nothing new under the sun.) 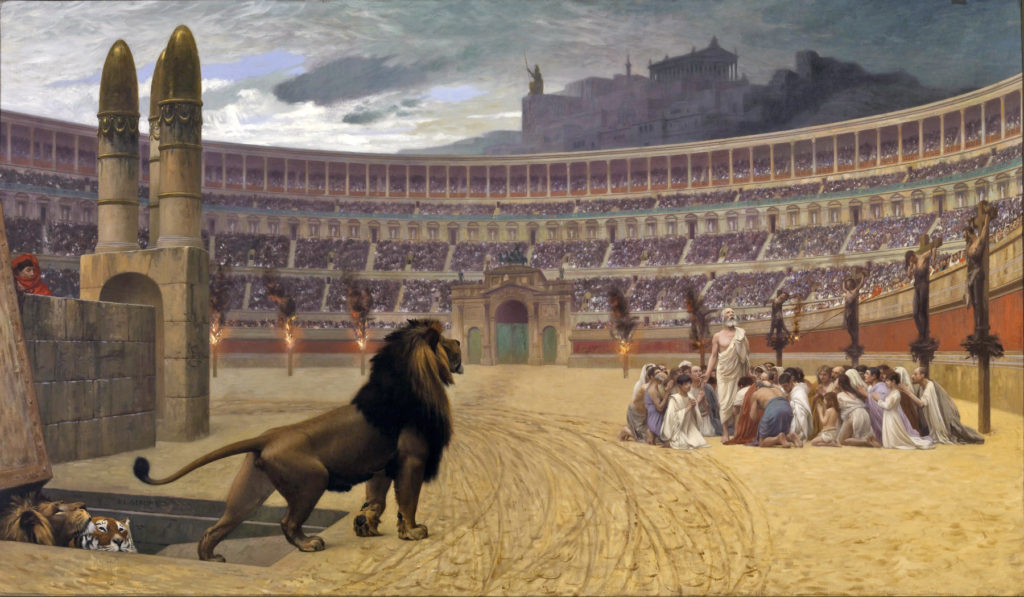 AmblesideOnline assigns worldview and Bible books in the upper years, and these books are wonderful. But I decided that for these children of mine, I needed to take a different approach. I wanted them to understand that not only is it normal human behavior to ask such questions, but that the Church sorted out the answers long ago and has held a consistent position since.

And so I started designing a Church Fathers course for ninth grade. (I’m also working on one for tenth right now.) I mentioned it last year, but didn’t explain much because I hadn’t actually done it yet. Now that ninth grade is over, I can say that it went really well, the reading schedule I created was (mostly) reasonable, and I absolutely love that we did it. (Yes, I plan to do it again with future ninth graders.)

There is one caveat, however. When we add something to AmblesideOnline (and probably any other curriculum), we need to make sure we take something away.

It’s too easy to overload our students because, especially in high school when their reading capabilities tend to be amazing, there are so many good books to choose from. It’s sort of like eating. Steak is great, but eating five of them is going to make you sick. Same thing with the books. Overloading tends to backfire.

In the case of this Church Fathers reading course, I removed the AO Year Nine devotional reading and substituted this plan in its place.

What did we read?

I thought it’d be wise to begin with history. Students raised up on AmblesideOnline have by this point already read not only Trial and Triumph, but are familiar with reading original church history sources via selections from Bede’s Ecclesiastical History in Year Seven. (AO’s page of Bede selections broken up by week is here.)

Eusebius starts his history with the Bible itself. He begins quite literally at the beginning, tying Christ firmly to the Old Testament, and then his history proper begins where the book of Acts leaves off. He quotes extensively from primary sources, and Paul Maier’s notes are a helpful correction for the times Eusebius veers off into error a bit (like the time he confuses a couple of the Roman emperors). Perhaps the most fascinating part is when Eusebius reaches his own time and begins to relate current events from his first person perspective, then slips into what can almost be described as poetry — a form of writing that reminded me of the end of Perelandra (when C.S. Lewis, in my opinion, goes on and on and on ahem).

Eusebius gave a sense of the types of questions the Church was asking, and how they dealt with conflict when different answers arose. It was important to learn what lines they did not cross and where they extended grace to one another. It was, in my opinion, a fantastic starting place for what I plan to be a four-year journey through a sampling of Church Fathers.

As if Athanasius were not enough, the remarkable introduction to this version written by C.S. Lewis is worth its weight in gold. This is where we find Lewis’ quotable passages about how we ought to read old books, chronological snobbery, and how it is often easier to read original sources themselves than it is to read some academic going on and on about the sources.

And he’s quite right.

While other authors I’ve read on the subject of incarnation have been rather convoluted, Athanasius is clear. He’s simple without being simplistic. He’s easier to read than many of today’s theologians, some of whom seem to have a side goal of impressing others with their intelligence, often making subjects seem more confusing than they really are.

It’s not that I’m against reading new theology books, but I think the Church Fathers, because they are often clear spoken and simple, are easier for beginners than we initially assume.

We spent two terms on Eusebius and one on On the Incarnation. I created a set of three reading schedule bookmarks (one per term) so you can see what we did: 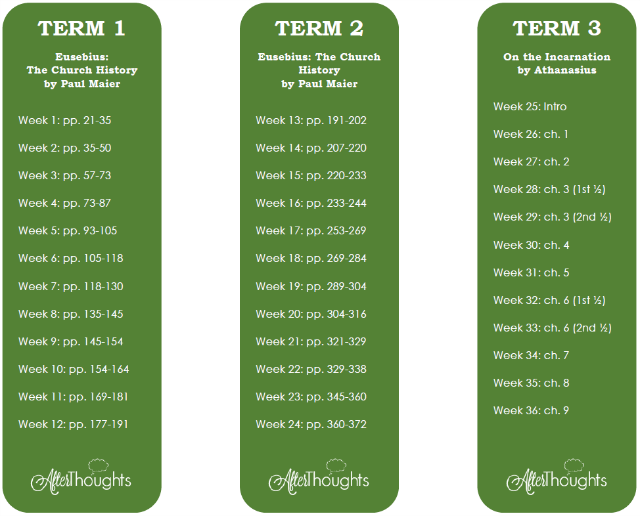 Pro tip: print these on index paper and then glue (or tape) Terms 1 and 2 back to back since they are for the same book.

A quick note about the Eusebius schedule: there are sections written by Maier that I skipped assigning. They are very interesting, but they aren’t part of the original text. I told my student that it’d be good for him to flip though them and read whatever interested him, but I didn’t assign it in the schedule.

To receive these bookmarks as a printable PDF, just fill out the form below:

Success! Now check your email to confirm your subscription and receive your printable bookmarks.