What Physical Education Looked Like in a Charlotte Mason School

[dropcap]M[/dropcap]ost of us know that a Charlotte Mason education consists of a wide and varied curriculum and that Miss Mason calls us to spread a veritable feast of subjects and ideas before our children. Did you know that this idea of “many and varied” can be applied within subjects as well? A look at the PNEU programmes reveals just that with respect to physical education, as there was a range of books listed in this category, and they varied from year to year. 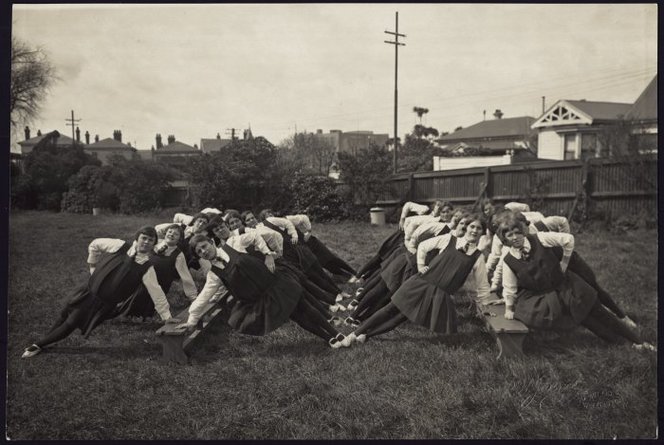 For example, in Programmes 90, 91, 93, 94, and 95, which were utilized for the school years ending 1918-1923, we find the following book recommendations for the category of Drill for Forms Ia and Ib: The Joyous Book of Singing Games, by John Hornby; Rhythmic Games and Dances, by Florence Hewitt; Syllabus of Physical Training, by Eyre & Spottiswoode; and British Marches for Schools, which contains sheet music, by Martin Shaw.

For the same Programmes applying to Form IIa, IIb, III, and IV, the Syllabus of Physical Exercises is still named as a recommendation, as is Skipping. Additional titles listed include Ball Games and Breathing Exercises, by Alice R. James; as well as Peasant Dances and Songs of Many Lands, by Mrs. Kimmins. We also see listed How to Teach School Dances as useful for the teacher, and another musical score – Music for use in Mrs. Wordsworth’s Classes “may be used” – presumably to accompany appropriate forms of drill and games.

In a timetable for Form Ib from 1892 we find listed “Swedish, or Flag Drill” from 10:20-10:35 on Monday, Wednesday and Friday followed by 15 minutes of Dancing. On Tuesdays, Thursdays and Saturdays Sol-fa or French Song occupies the first half of this slot, while “Play” occupies the latter part of the half-hour. For Form III the only differences in this slot for physical activity are that the first activity occupies 20 minutes while the slot for “Play” becomes only 10 minutes, and Flag Drill is no longer listed as an alternative: the Drill listed is Swedish Drill alone.

I have not explored this theory in great depth, but it appears to me that physical education in the PNEU schools started with an emphasis on Swedish Drill, but later grew to include other forms of drill as they became established in England; however, Swedish Drill was always among the drill choices emphasized during Charlotte Mason’s lifetime.

We see in later time-tables and programmes a reference to “drill” in general, which does not necessarily mean Swedish Drill. There were many types of drill implemented in Victorian-era schools, including musical drills, ball drills, skipping, and marching. In one book recommended by Charlotte Mason in a Parents’ Review article, we find instructions for Desk Drill, Military Gun Drill, Swimming Drill, Scarf Drill, and Maypole exercises. (It also includes an overview of Swedish Drill that is an inadequate representation of the method, but I’ll refrain from commenting on that at this time).

Swedish Drill was one element in a category that included many other types of drill, as mentioned above. Other physical activities in this time slot included folk dancing and games as well as calisthenics. So, the time slot for Drill on later PNEU timetables was not solely devoted to Drill — and Drill referred to more than just Swedish Drill. Clear as mud? Let me (try to) explain.

Collectively, the PNEU timetables refer to “Drill,” but this was likely not solely dedicated to Swedish Drill. Rather, Swedish Drill was one element in a category that also contained musical drills, ball drills, skipping, marching, calisthenics, folk dancing, and “games.” We also know that sol-fa instruction found a home in this time slot on the PNEU schedule. Presumably in support of this, many of the activities that were found in this slot were likely set to music. Musical scores have been found on the programmes that lend credence to this idea. We have discussed previously that Swedish Drill, when performed as designed, should not be set to music. There may have been exceptions to this rule, which we will talk about in a future post, but I want to limit this discussion to an overview of physical education in a CM paradigm.

If drill means more than Swedish Drill, then why have I been focusing solely on Swedish Drill for so long? Swedish Drill happens to be the one form of drill that Charlotte Mason specifically names in her volumes — which makes me suspect she saw great value in this particular form, wouldn’t you agree? In the earliest time-tables I have seen — the 1892 one referenced above — there is no generic listing of drill: it specifically lists Swedish Drill. Charlotte Mason even goes so far as to say “nothing is so good as Swedish Drill.” She names it. She doesn’t just call it “drill.” This implies that she saw an especial benefit from performing this particular form of drill. And so do I.

I will continue to focus my efforts on understanding and developing this particular aspect of physical education in a Charlotte Mason education. However, I also hope to explore the categories of marching, skipping, and games in future posts and demonstrate the value of adding these elements into your own home “Drill” time.

Time Will Tell: A Reminder to Take the Long View