[dropcap]W[/dropcap]hen E-Age-15 was a preschooler, I was in my romanticizing-gardening stage. (Gardening is not a handicraft, but stay with me.) I read a lot of Wendell Berry and dreamed of a day when we raised our own meat and vegetables and dairy products. We ended up doing a lot of those things (we don’t do  a lot of them now), but in those early days it was just me and Son E., learning to garden.

Apparently, I have mostly black thumbs. Thankfully, Son E. is nothing like me. 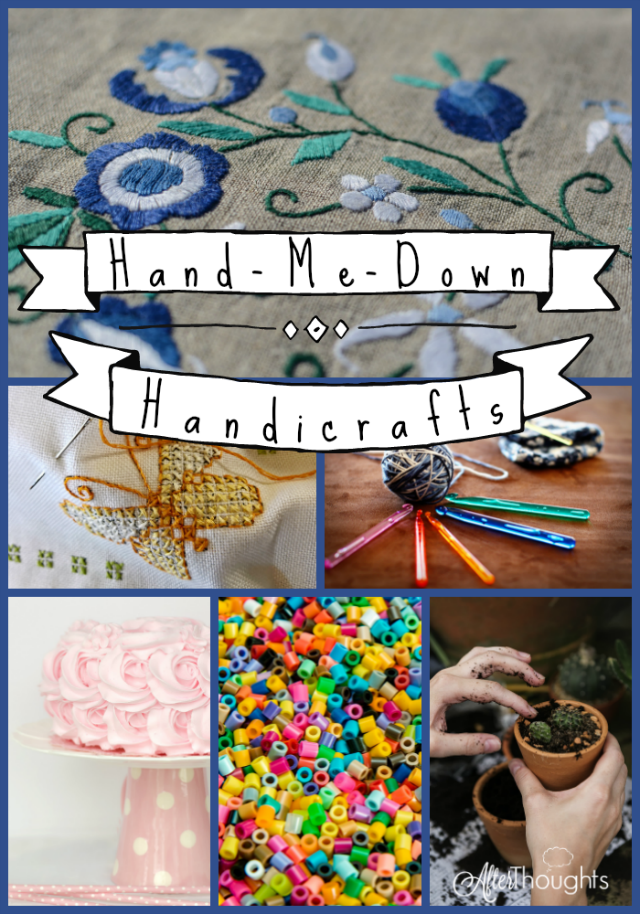 The growing season here is 10 blessed months out of the year. During those 10 months per year, for a number of years in those early days, we ordered seeds, read gardening books, planned gardens, and even did some real-life execution. We weren’t super successful, but we learned a lot, and it was fun.

Somewhere along the way, I had three more children and also started homeschooling. I needed to choose between spending my free time gardening, or spending it on other things.

I chose other things.

We didn’t completely stop gardening. I still bought Son E. pretty much any seeds he wanted, and I still made sure we had zucchini and tomatoes in the summer garden. But I didn’t spend hours gardening in my 30s like I had in my 20s.

Turns out, hobbies can be contagious.

I spent a lot of time gardening with Son E. and Daughter A., and then those two taught Daughter Q. and Son E. everything. Younger children suffer from an excessive “me, too!” syndrome; it took no convincing at all. The older children were doing it, and they demanded their own garden plots.

What does this have to do with handicrafts?

I beat myself up over handicrafts if I spend too much time thinking about it. At heart, I’m a philosopher — not so much a butcher, baker, or candlestick maker. My type of crafting generally involves words. Now, I’ve tried to fight this for the sake of my children, but this is still my reality.

I do, however, have my moments, and in the past I have accidentally used them to my advantage. I plan to do this deliberately in the future, and I predict larger successes because of it.

Last week, Q-Age-10 made her sourdough bread and I posted a photo of it on Instagram:

Q-Age-10’s sourdough bread is half organic white and half organic kamut and soooooo good. Let’s hear it for #ediblehandicrafts ? #charlottemason #amblesideonlineyear5

It dawned on me that I never taught her to make bread. When Son E. was a bit younger, he started eating my sourdough bread faster than I could make it. At the same time, I realized I needed to help Daughter A. go gluten-free. I stopped baking bread so that I could learn to do all things GF (again … this was not our first foray into the lifestyle). Son E. put up a fuss and so I told him I’d teach him to bake bread. My father was also into baking bread, and eventually Son E. baked his own style of bread that was a combination of what he learned from me and what he learned from my father.

And then it happened: Son E. stopped making bread. It was Daughter Q.’s turn to put up a fuss. He had stopped because he was moving on to other things — guitar, podcast editing, etc. She whined and complained; I suggested she ask him to teach her. She did and he did and the rest is history. She now makes bread.

I think there are a few principles here: handicraft-type skills are (1) contagious and (2) relatively easy to pass on. They also tend to (3) continue to grow of their own accord. If we were to leverage its contagious nature, that would really be something!

In 2015, I went on an origami kick. Paper folding = something I can do. Every morning, I folded paper with my daughters. Eventually, they got to where they could — and wanted to — progress faster than just those morning lessons. They learned to read the directions for themselves. They folded their way through entire books of origami activities.

This year, on a rainy day, when Son O. was bored, Daughter Q. sat him down and taught him some origami. Later, he brought his supplies to me and I worked with him. Now he has some mad paper-folding skills when he wants to exert the patience to do it correctly.

I could go on and on with examples — like that time I bought Hand Lettering for a Latte and my girls wanted to do it with me — and later I found they had taught their younger brother one of the fonts. Or that time we bought a potholder weaving loom. First, only Daughter A. wanted to use it. When she became bored with it, Daughter Q. was just getting interested, so she showed Daughter Q. what she needed to know. A year later, Daughter Q.’s projects interested Son E. enough that he asked for his own loom.

I used to have all these rules for what made a handicraft lesson — all my children had to be there, it had to last a certain amount of time, etc. As the children got older, it became more and more difficult to meet my strict criteria.

But what is the goal of doing handicrafts? Well, for my children to have a useful skill. For them to be able to make something beautiful. For them to have relationships with things — with different sorts of materials.

I was overcomplicating the process, which is easy to do with something you’re either not very good at, or when you’d rather be doing something else.

Enthusiasm is contagious, which is why hobbies are contagious. Wouldn’t it have been simpler if I’d realized this years ago?

These days, I grab the nearest or most interested child and I give him or her a lesson and I don’t worry that the others aren’t at home or are already involved in some other project. I’ve learned to trust to the ontology of the thing. If I do a good job teaching this child, the others will probably find out all about it in time.

An added bonus has been private time with individual children.

As families get bigger and the children get older and busier, it’s easy to feel like there’s no time for handicrafts, or that younger children aren’t getting what the older children got. The truth is that there is no time for handicrafts done the way we did when we only had a couple young children. It’s also true about the younger children. They get something different than their older siblings got: a multitude of counselors rather than one mom who feels like she needs to be the font of all wisdom.

It’s sort of like I said in Old Enough to Bless Others: the youngest children can be blessed by someone other than me. This is actually a great gift. Younger children tend to get more than the oldest child, not less — especially if the family culture encourages this sort of communicability.

If you’re paralyzed by handicrafts (or something else) maybe it’s time to evaluate how you’re doing it. Are you putting pressure on yourself to do it one way, when it would be more efficient to do it otherwise? Don’t stand there feeling like a failure: teach one child one thing, or encourage one child to teach another something they already know, and watch handicrafts begin to take care of themselves.

This doesn’t mean you don’t need to be involved, it just means the whole process doesn’t have to revolve around you.