For Love of the Bard: One Model for a Shakespeare Club

[dropcap]S[/dropcap]ince my earliest days of homeschooling I longed for a cooperative learning community like the TBG community frequently described by Nancy Kelly. In particular, I was inspired by the group’s many Shakespeare performances, and eagerly looked forward to the day when my sons would be old enough for such a group. When my oldest child became the age at which Charlotte Mason began reading Shakespeare plays in the original with her students, I was thrilled to dive in with him. Why?

And Shakespeare? He, indeed, is not to be classed, and timed, and treated as one amongst others, — he, who might well be the daily bread of the intellectual life; Shakespeare is not to be studied in a year; he is to be read continuously throughout life, from ten years old and onwards. But a child of ten cannot understand Shakespeare. No; but can a man of fifty? Is not our great poet rather an ample feast of which everyone takes according to his needs, and leave what he has no stomach for? (Charlotte Mason, Formation of Character)

We were already familiar with the story lines of many Shakespeare plays, and I was eager to see whether this enhanced my son’s experience with the originals. I have no doubt that it did, as he laughed at all the right places and become appropriately exasperated in others. He didn’t — and doesn’t — understand every word, but he enjoyed the musical language and eagerly engages with the material. I couldn’t wait to enjoy this with a community of learners.

Shortly after beginning to read an original play together at home our Feast community decided to include Shakespeare on our Feast Days. Because our time together was limited, and because this group included several older Form I students as well as younger Form II students, we decided to read the Bruce Coville picture book version of The Tempest in lieu of the actual play. This was a good starting place to hook our young scholars with a love of the Bard.

After reading the book the participants voted on their favorite section of the book, from which I chose the corresponding scene in the actual play, which we then staged and produced to present at our end of the year Feast Family Day. It was a hit, and we all had a blast in the process.  Still, we wanted to create an opportunity for our students to perform a full Shakespeare play, and this desire led to the formation of our Shakespeare Club. 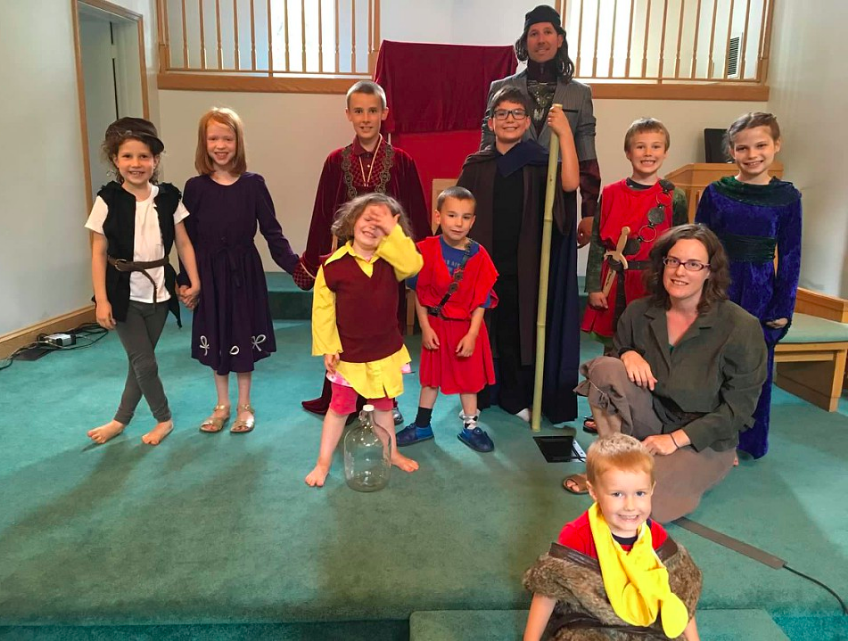 In order to increase the pool of young players we opened up participation in this Club to the entire community, which consists of committed Charlotte Mason families as well as some families only marginally following a Mason philosophy in their homeschools. Inspired by Amber Vanderpol’s plans at Flare of Light and armed with Shakespeare for Children: Six Scripts for Young Players, I began to plan for the Club while excitedly receiving emails informing me that eighteen children ages 9-13 wished to participate.

Also greatly inspired by Celeste Cruz’s Shakespeare Festival, the email announcing the Club included an invitation for those families unable to participate in our regular meetings to prepare a scene or soliloquy to recite at the performance of the play at the Club’s conclusion.  By combining the two ideas we hoped to create opportunities for every family in our community to participate on the day of the performance. While only one family chose this Festival option during our inaugural event, I have great hopes that many more will do so with our second performance-based Club in Fall, 2018.

I spent several weeks over the summer planning for a fall launch, and this greatly contributed to the positive experience that was our inaugural Club. I analyzed the script and broke it down into the various roles that must be assigned to participants. I calculated how many scenes each character appeared in, how many times they spoke during the play, and the total number of lines they would have to deliver over the course of the entire play. I wanted this information to help me to effectively cast the play. I didn’t have experience with the majority of the students who would be participating and I needed something to guide me in the selection process as I became familiar with their desires and abilities over the first two Club sessions. This was a time-intensive task, but I am very thankful that I invested in doing it properly, as it was immensely helpful in casting the players to their roles so beautifully.

Because we had more roles than we had participants, several players were assigned multiple minor roles. To assist with casting in this area the guide I created included a list of the characters that appeared in each scene of the play. I needed to know this information to insure that I didn’t assign a child multiple parts that appeared in the same scene of the play.* Despite this preparation I still assigned one child two parts that appeared in the same scene, but this was easily corrected with some minor changes to the script that did not change the overall feel of the scene. It was definitely a learning process for me last fall, and I very much look forward to refining processes the second time around.

In this first Club experience we met for two hours a total of six times. The first two meetings the group remained together for all activities, including reading and narrating the Bruce Coville version of A Midsummer Night’s Dream as a means of familiarizing students with the play. The young players also recited lines they had prepared in advance in front of the group and took turns reading from the script we would be using. These things afforded me the opportunity to assess their strengths and weaknesses as they delivered lines and read aloud, which was helpful in casting parts the following meeting.

During the final four meetings organization became a bit trickier. There couldn’t be any opportunities for sitting around for some players while the others were practicing their scene on stage. This is why it is so critical that other parents are involved in the operation of the Club — it absolutely cannot be effective without many hands — and minds! — pitching in. I was blessed to have one mother work alongside me for all of the meetings, and another mom joined us from meeting 3 onwards. As a result, one group could be working on blocking a scene on stage with me while a second group worked on projection and public speaking skills with another mom, and a third group worked with the third mom to prepare the props and backdrop for the play. We rotated through these groups with minimal transition time to avoid the inevitable goofiness and misbehavior that results when there is a lack of focused activity. 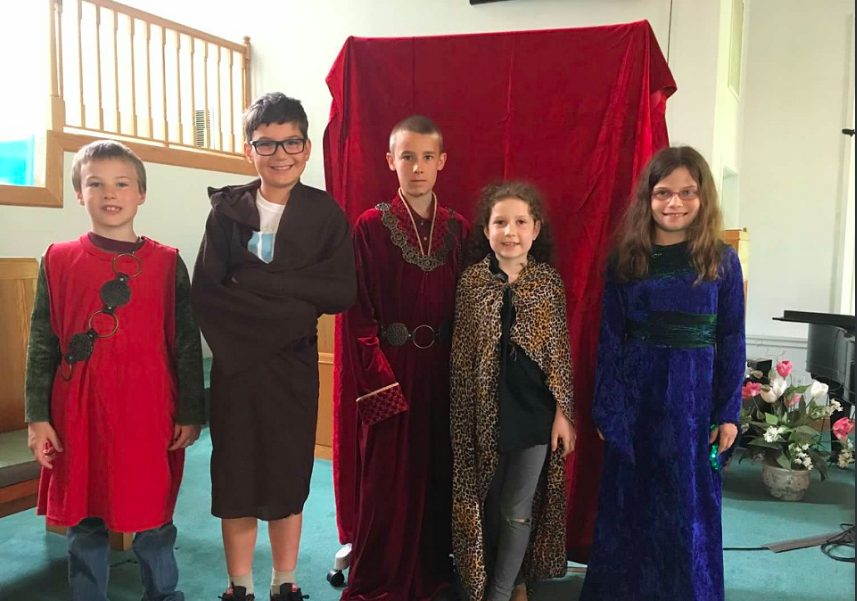 The cost for the Club was minimal and there were no fees involved to participate. We were able to use space at a participating family’s church at no cost. The biggest expense was having multiple copies of the script printed so that students could each have their own copy. Expectations were made clear to all parents from the beginning: parents were responsible for contributing to the cost of creating the backdrop (i.e., purchasing flat sheets that could be painted appropriately) as well as outfitting the young players with an appropriate costume (again, mostly consisting of flat sheets used as togas).  Instructions were for this to be an entirely home-grown production (i.e., we did not expect — or want — parents to invest money for a one-time performance). Instead, we wanted them to use what was available for them to outfit their players.

Our inaugural Club was intentionally designed as an introduction level to Shakespeare: we wanted participants to fall in love with the Bard through exposure to his word play and humor as well as experience the joy of performing. Feedback from the participants and their parents after the final performance was overwhelmingly positive, and no one wanted the Club to end: there was much clamoring for “more.”

Isn’t this precisely what we had set out to do? Hook our kids on a love of Shakespeare? That is exactly what happened. We determined that this performance-based Club would become a fall event in our community, and that we would use the winter Club meetings to dive in to reading a full Shakespeare play for pure enjoyment rather than for performance.

But that Club is a story for another day. Stay tuned!

*For those of you intimidated by what sounds like a lot of work let me assure you that the majority of this prep came at the front end of the Club experience. After the second session there wasn’t much preparation required for each meeting other than a rough outline of the schedule.