Sixteen years ago today, I became a mother. I guess boys can’t be “sweet” sixteen. I have been told that would be silly by a well-informed person who lives here and bosses me around. Heart of my heart, it’s hard to believe it was so long ago, and that he’s so big and capable now. I’m savoring these last years with him at home.

Every year I hope this will be the year I can afford house cleaning help. And just about every time I think I’m going to take the plunge, my car breaks down. ?? On Friday, while sitting at the mechanic’s (I forgot to bring a book! ?‍♀️?), I had an epiphany. My children keep begging me to finance their pet projects (they don’t receive an allowance), and I wish I had more help with the house. Maybe this is a providential problem? My children work hard and do chores daily, so I’ve hesitated to add more to their lists, even though there are things undone. Enter the Job Board. It’s my new experiment. A child who wants money can check the board. Most jobs will only pay $1 (though I ALWAYS pay $5 for the shower…long story I won’t go into). Here’s how it works. If Girl A wants to do a job, she comes and asks me for it so I can give any necessary instructions. She does the job and then reports back to me. I inspect the job and pay her once it passes inspection. She erases the job from the board. I add new jobs as I think of them…and try to remember to keep dollar bills on hand. ? ?

It’s been working well so far. I’ve added more chores to the board, and others have been erased because they were done. Everyone was pretty excited, and now when someone tries to bum money off of me, I just remind them, “There’s always the job board!”

The last Scholé Sisters episode of the season! 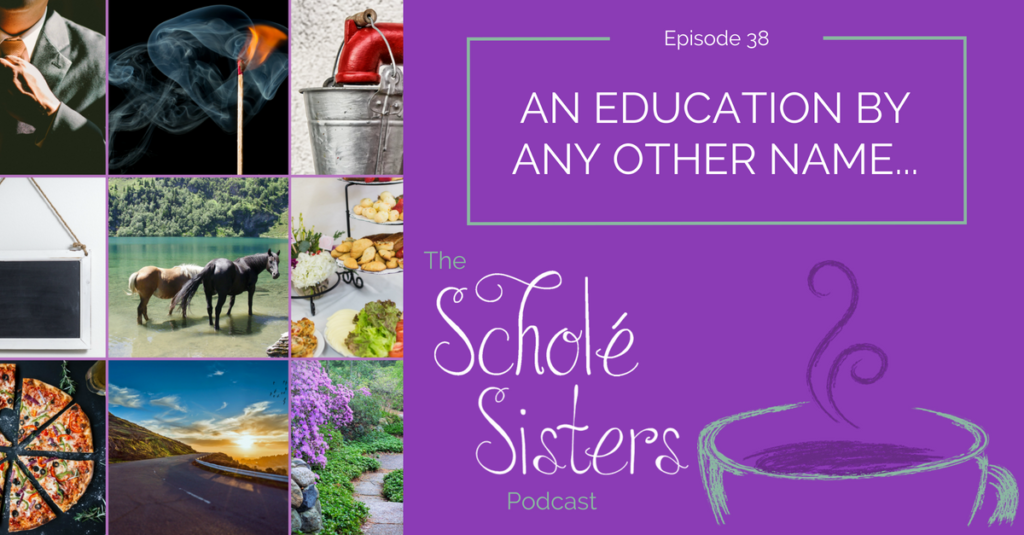 Thanks for the birthday greetings this week! (I am determined to celebrate for a full month.) Hayley said things about me that were far too nice, but I forgive her for it (and also for hacking my blog). I’ve been asked if it was hard for me to turn 40, and the truth is that it hasn’t been. I keep waiting for the trauma, but it never comes, and now it’s been two weeks! I felt similarly to when I turned 30. Back then, I was pregnant with my fourth child. All the time I heard, “Pregnant with your fourth, and you’re only 29???” And then it was like magic. I turned 30 and people stopped making comments and accepted that I was indeed old enough to have four children. Forty is much the same, with people telling me I’m “too young” to have a high-schooler, to have two teenagers, to be teaching someone to drive, to be talking about college. Blah blah blah. Now I say I’m forty and it sounds so much better.

I have also experienced ageing backwards, I think. I wrote about this in Life Without a Cape: There Are No Supermoms Here. I’ve traveled a difficult health road, beginning with Lyme Disease in my teen years. My pregnancies were horrendous and I was sick all the time. I was anemic for years and had untreated, unknown genetic issues. Straightening them out in my mid-thirties means that I feel pretty good! While I don’t feel 22, I feel the best I’ve felt since I was 22, if that makes sense.

Mystie, my dear friend and Pretend Life Coach, has been up to this goodness:

The Simplified Organization eCourse is SOOOO helpful, but it’s even better with this 12-weeks of accountability. If you want to spend your summer getting your life (and attitude!) in order, I highly recommend it. This book, Endangered Minds by Jane Healy, was just brilliant. So much in common with Charlotte Mason that I wrote a whole post on it, and that was only just a taste!

For Love of the Bard: One Model for a Shakespeare Club